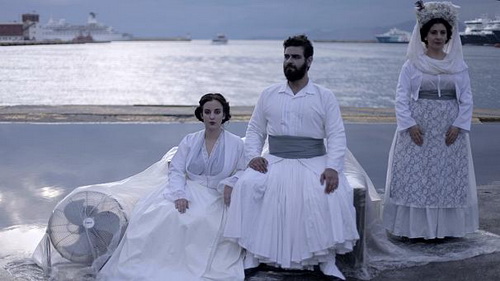 A play reveals the unknown history of Greek vampires

It may sound unbelievable, but there were vampires in Greece! The engaging theatrical performance by Konstantinos Dellas and his “boulouki” theater company tells the story of Greek vampires, based on reports from medieval and modern Greek literature.
“The Greek Vampire”, currently on view at the Municipal Theater of Piraeus, attempts to shed light on these mythical beings. While relying on the musicality of speech and the action of their bodies, the three actors give a theatrical essence to essentially narrative texts.
“I conceived the original idea for the play by reading an article by a Frenchman about travelers visiting pre-revolutionary Greece and witnessing numerous incidents of ‘vampirism’, and the reaction of the population to them. this. I was impressed because until that time I was unaware of such extreme incidents; exhumations of the dead, heartburns or massive incidents of paranoia, had taken place all over Greece,” Dellas said in a report by the Greek edition of euronews.
Asked about the research involved in the piece, Dellas referred to several traveler reports, urban legends from various parts of Greece, local newspaper articles, literature, folklore, and ecclesiastical texts. With material found on the internet, Dellas used the reports to create the piece.
A person can be turned into a vampire for many reasons, called “vrikolakas” in Greek, Dellas said. “According to local beliefs and prejudices, people born or conceived on a holy day, heretics or those who had been excommunicated, professional magicians, those who had harmed society, or deceased people whose funerals had been improperly conducted, were all at risk. to become vampires.
As for getting rid of vampires, the director refers to both known and obscure methods, the use of the cross, fire and wooden stakes, the decapitation of the corpse and the burning of the heart. Of course, we must not forget about the weapons provided by nature, the sun and sea water.
Dellas also references some key stories and incidents. “When reading about an incident of mass paranoia on Mykonos in 1700, as well as another witness report where a deceased person was considered a vampire because he would not obey the priest’s order to eat food brought to his grave, a text by Manos Hadjidakis came to mind, entitled “The Return of the Vampires”, in which the famous Greek composer talks about the expansion of neo-Nazism in Europe.
Are there really vampires in Greece? Dellas replies with a smile, “As long as we knock on wood not to tempt fate, there will be vampires too.”