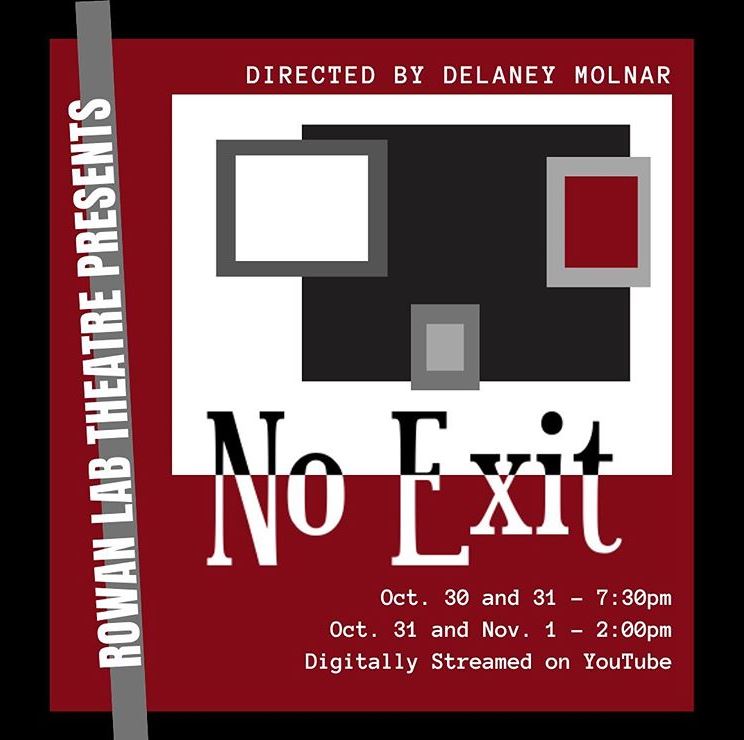 Act II, scene II: “No Exit” – The Rowan Lab play that made the transition online

On October 26, I had the pleasure of attending a rehearsal of “No Exit” written by the French playwright Jean paul Sartre and performed by the Rowan Lab Theater.

“No Exit” tells the story of Vincent Cradeau, Inez Serrano and Estelle Delaunay as they are paired up in the afterlife.

The rehearsal began with a few stretches led by director Delaney Molnar. Stretching may seem simple, maybe even a little boring, but is very important to an actor. Good acting requires a lot of physics, even if your character isn’t very hyper. Emotions, whether experienced or represented, create a lot of tension in your body. Elongation is a great way to release all that stress and tension and prepare your body for the scenes to come.

Instead of the mic controls came the camera controls, something new in this digital art form. Testing the camera angle to ensure that the actor can be properly seen throughout the show is essential for a zoom performance. Because the audience isn’t actually in space, the only things they can see is what the camera can see. Molnar prompted the actors to make adjustments to the angle of their computer camera to set up the shot perfectly.

Then the actors embarked on their performance!

Personally, I loved the show. The actors did an incredible job staying in their character when they were without a reply. They handled the intentional silences without the slightest embarrassment. I was surprised by this as I could imagine sitting alone in a room waiting for my next line or another character to arrive through a computer screen.

Each character was played in their distinct differences, visible by their first spoken line. All reactions were displayed as a character with little to do with the actor portraying them.

The understated set design given to them worked in their favor as it was a small but important part of the original script.

After the rehearsal, the to throw answered a few questions:

What were your reactions to the online performance?

Stefanik (â€œInezâ€): So at first it was very shocking. We were so almost put on our show and then somehow it was taken away from us. So even though it was a bit sucked, now we had to adjust to a new thing. Fortunately, we were given extra time. If we hadn’t had that extra time – Oh, my God, I think I would have freaked out so much. But in the end, I think we put on a very strong show. So whatever [the transition], I think it’s still as good a show as it would have been.

Slingluff (“Vincent”): For me, I think [was] upsetting, of course, that what we have been working on for a month is almost completely dismissed. Corn [with] come to this parameter [and] this idea of â€‹â€‹being locked away in the spectacle, and of feeling trapped in this virtual world in which we all have to live for the moment, draws a parallel. This gives a very present meaning to the piece.

Molnar (director): Like Kirk said, from the director’s point of view, I was like, â€œOh shit. I have to throw away everything I worked on. Then I realized I wasn’t quite throwing it away. We were just rethinking it, so it was kind of like a ray of hope. No, we are not starting from scratch; we’re just reworking what we already have, which allowed me to sleep a little more at night, knowing that we weren’t completely starting from square one.

How do you think the transition helped the play and how did it make it more difficult?

Molnar (director): It made it more difficult in a lot of ways. I think the actors can attest to this, it’s infinitely more difficult to act through a computer – and in an empty room – than when you have everyone around you. Might as well try to to organise a show in Zoom: it is also very difficult. But I think it allows us to play with space in a different way, which is more interesting than in a normal, regular show, in person, on stage.

What lessons do you think you learned from the play?

Lacher (“Bellboy”): Something I guess I learned about the show was like [itâ€™s] interesting … how even if the three [other characters arenâ€™t] in the same room together I always feel like they always have the same thing against each other [energy]. I think it’s really cool that we were able to make the transition because I know when we were in person it was so cool because [of] everything we had going on, but I think it just transferred pretty much.

Molnar (director): I always think of [how] it reminds me of people, cooperation and working together. And are you doing selfish things for your own well-being? Or are you trying to benefit the rest of the group? And I think that’s definitely something we’re looking at now, in the days of COVID and everything like – do you do things selfishly, because it makes you happy? Or do you sacrifice things that make you happy for the sake of everyone? And that’s, I think, a big theme of this show.

Do you have a favorite part of the rehearsal process?

Stefanik (“Inez”): I think one of my favorite parts of the rehearsal process was when we were still in person, with the original blockage we had. We had a lot more – I don’t even know how to put it – like a complex blockage, where we kind of show how these scenes played out on Earth, but [we were] back to hell. We had this cool streak and loved it. Unfortunately, that is not stated in this. It was those three moments – Kirk’s, mine, and Val’s – like those three times we had this cool blockage that I loved.

What excites you the most when productions come back in person?

Calderone (“Estelle”): I just want to see everyone in person. It is so different. Being virtual I feel like you don’t … there are really so many benefits in face to face interaction and hugs, cuddles. I know we probably won’t be hugging again for a while, but I miss the hugs.

Stefanik (“Inez”): Yes, I’m really happy to have the energy of others [and] share a real space with them.

Calderone (“Estelle”): Yes, I am delighted to be able to watch them. I’ve really taken this for granted for so many years that I’ve been playing; just that simple eye contact goes a long way.

“No Exit” will be broadcast on YouTube on the following dates:

For questions / comments on this story, email [email protected] or tweet @TheWhitOnline.

ONU Theater Arts will livestream the production of “Blocked!”

Art films of the Olympic theater “Radio Plays” from the stage