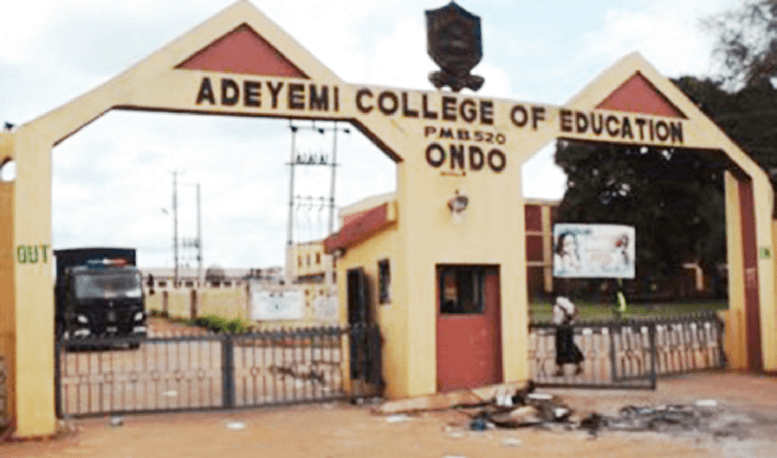 The Department of Theater and Creative Arts at Adeyemi College of Education, Ondo unveiled and inducted its first students in the Rites of Passage as a mark of entry and acceptance into the role of Thespians.

The induction ceremony which signified the exposure of the students to the rules and regulations governing theater and the creative arts is the first edition in the institution where 18 students of the school were inducted.

Speaking at the induction, the head of the department, Dr Charles Ogazie, described the induction of the students as a real dream, saying that â€œour students can now gladly call themselves comedians because they have been inducted to theater arts.

He called on the school administration to â€œvaliantly pursue our course approval with Obafemi Awolowo University, Ile Ife.

â€œWe cannot afford to let these students go to another university in the name of pursuing a degree program. We have worked and hope to retain them in college for their program of study.

Speaking about the experience of the new inductees, he said, â€œThis is the time for the city and the robe to meet. We have practitioners here and we have gowns, and this is a forum for us to meet.

â€œAs our high priestess is from the city and we are in robe. We went out to shoot movies with them and I think we blend together well. We are more into theories when they are in practice, so we mix theory and practice to become a role.

He described the theater as an imitation of life, a society within a society and a reflection of the world we live in and said: life.

â€œTherefore, make it a duty to be a part of us on this never-ending journey to Adeyemi College, either as an amateur who frequents the theater or as an actor on this side of the divide.

â€œI wish the inductees success in entering the real world of theater and everyone else the beauty and joy of theater. We are here to bring the reality of life to your doorstep by reconstructing and replicating culture and history beyond documentation.

The rector of the school, Dr Samuel Akintunde, who declared the program open, congratulated the young inductees who he said would become professional performing artists, even if they have just started their formal academic and professional training in performing arts and culture.

He enjoined the students to show more commitment to their studies knowing full well that the initiation program had just introduced them to serious academic and practical studies, and therefore they should give whatever was necessary to become academics and world-renowned practitioners of the arts.

YOU MUST NOT MISS THESE TITLES NIGERIAN TRIBUNE

#EndSARS: As UK Parliament hears petition, UK government says it will not speculate on sanctions