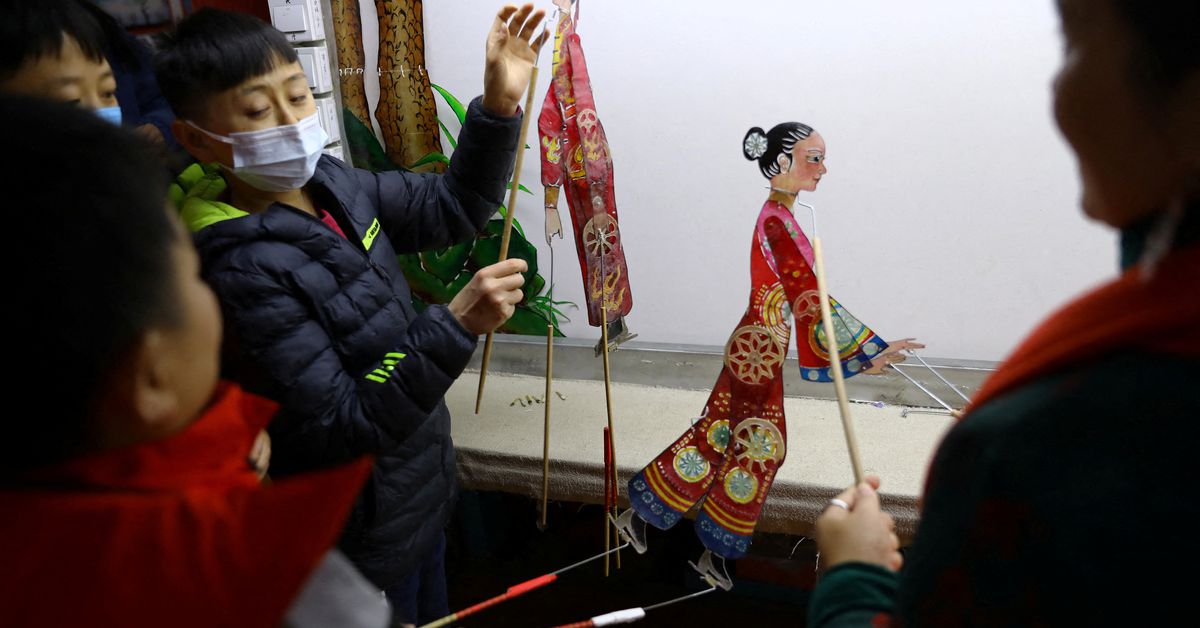 BEIJING, Jan 27 (Reuters) – Two graceful figures toss a puck back and forth on imaginary ice, ahead of a scuffle and a victory lap for a skater, in a depiction of real-life battles set to unfold as the ice opens. Winter Olympics in the Chinese capital next week.

The Dragon in the Sky puppet troupe hopes its Olympic-themed shows will attract more people to its small theater on the outskirts of Beijing, which employs about 40 puppeteers, all of whom are little people.

The troupe, which started in 2007, makes its own puppets, carving the intricate cuts out of leather and painting them in vibrant colors, a technique that has barely changed in thousands of years.

“We had to repeatedly watch videos of the Winter Olympics, such as ice hockey, curling, and skating, to design the most realistic and accurate shadow puppet movements,” Chai said. Yanji, a 24-year-old puppeteer, after a recent performance.

During the show, five puppeteers stood behind a white curtain, energetically maneuvering the limbs of the two main characters Ice Prince and Snow Lady with long handles to look like they were sliding on ice.

Since the shadow puppets are two-dimensional, it was difficult to show two-person skating, said Li Hui, another puppeteer.

“Usually we try to keep a ghost figure to one side and avoid constantly switching positions,” Li said.

Although personally more interested in badminton and table tennis than winter sports, Chai hopes the troupe’s Olympic shows will rekindle interest in the traditional art form.

Attendance at shows has dwindled over the years and the theater has been hit hard by COVID-19.

Undeterred, Chai still dreams of becoming one of the country’s few shadow puppet masters, even though he’s only been in the profession for a few years. Earning this achievement would bring Chai fame and a chance to travel the world.

“I’m at the final stage,” he said of the qualifications, where puppeteers are assessed on their skills and demonstrate their experience after taking part in numerous performances.

With the scenario reversed by COVID, the theater community in St. John’s pivots around another disrupted season by making its art more accessible

Alex Boniello’s favorite games (and other stuff) of 2021