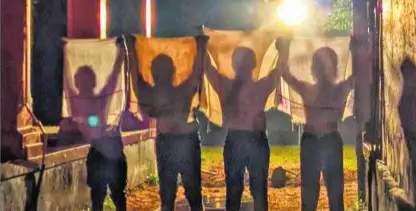 Beyond the Stage and the Script

KOCHI: Although it’s a universal experience, each individual remembers death differently – and that memory is laced with feelings of intimacy triggered by something as mundane as a Marie Biscuit. Personal encounters with the dark subject connect each viewer to the roots of their past, and they become more than spectators, they become participants.

“The performance begins with a request to the audience. How do you remember death? Each spectator writes a word that comes to mind on a tray filled with sand placed in the center. They write with their fingers. These words and a few described by the actors make up the first scene,” says Emil Madhavi, director of theatrical performance. imitation of death. “What each of them says is different. They remember the smell, the cold, the darkness of the room. Coconut shells and lamps are placed close to the body. The tea that is served at funerals and the Marie biscuits. Each person remembers death differently,” he adds.

Drama is more than a script, it’s life stories. “All the following scenes are set in different rooms and locations. It’s like walking through a museum. As a director, I tell the audience where to go,” says Emil.

Shortly after the first scene, viewers are asked to tie a cloth around their eyes. Then they cross different surfaces that their feet can identify – ground, grass and water. “Then they reach the next scene with a specific smell and sound, where someone is preparing a grave,” he explains. This scene is called The color of the ground. The scene is a frame of the man digging the grave. Despite the absence of dialogue, the reverberating breath of the digger fills the scene. Everyone in the audience can hear it near them, which makes the whole thing intimate. The scene takes a shocking turn when the man digging the grave becomes the one to be buried. The public becomes the one who spreads earth on the body lying in the tomb.

The scene changes from there. “A man attempting to commit suicide enters the scene. Viewers can hear his ramblings and feel him close to them. His agony is implicit when he recites numbers and number charts with obvious errors,” says Emil. A girl lying in a coffin follows the scene. She will connect with the audience by holding his hand and hugging him to say goodbye. She will talk to them and answer their questions.

“Every scene is shrouded in darkness. Every room is fresh. Everything reminds you of death,” says Emil. The production ends with death face to face with each viewer. Viewers live out their respective endings peacefully. and titular is deeply meditative.”Every person experiences things differently. I feel like if someone claps after the show, I’ve failed in my efforts. So far, no one has clapped,” Emil quips.

Emil presented for the first time imitation of death in Hyderabad in 2017. “There, people and actors from different states and cultures shared their experience on the subject. It was different in a way, but at the same time the feelings and experiences were somehow common,” says Emil.

Having acted in around 40 theater productions and directed 25 plays, Emil wanted to experiment with different modes of theater production. “What we have now are public theater performances in auditoriums and stages where we spend on lighting, sound and venue. But many theater productions cannot afford quality technology. the actors are paid a pittance at the end,” says Emil. His solution was to make the production intimate with a limited audience. Torches, candles, headlights of a car or motorbike became his lighting system, a system that doesn’t need to be over the top because the actors and the audience are close, Emil has named it “The Performance Museum Project”.

After showing his production in Hyderabad, he started exhibiting the program in Kerala last year. He centered the performance around the HSS Kokkallur government in Kozhikode, with the Maverick Art Society of the school’s alumni and teachers. Emil and company will soon perform in Kodungallur.

Turning the tide on medication adherence

Kirti Kulhari: It’s harder to get a script for comedy than drama | Hindi Movie News