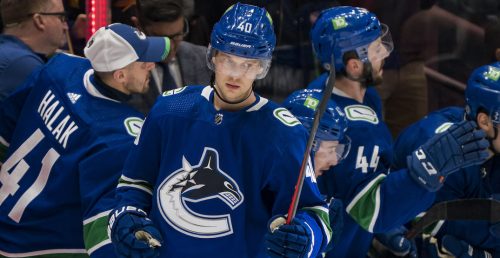 Canucks games will be limited to 50% capacity starting next week

After being able to host games at full capacity for less than two months, the Vancouver Canucks will be downsizing again.

With COVID-19 cases increasing exponentially every day in BC due to the Omicron variant, the BC government is implementing new capacity limits for sporting events, starting Sunday evening at 11 p.m. h 59.

Randip Janda of Sportsnet 650 was the first to report that capacity will be reduced by 50% for any venue that can accommodate more than 1,000 people. Rogers Arena has a capacity of 18,870 for hockey games.

I have been told that venues in BC with a capacity of 1,000 people or more will be limited to 50% capacity from Monday, December 20 until the end of January. Sense #Canucks the games will be half full after this weekend.

The new health order was announced this afternoon by BC Provincial Health Officer Dr. Bonnie Henry.

“Halls with a capacity of 1,000 or more will be limited to 50% capacity, whether it’s a concert, hockey game or theatre,” Dr. Henry. “It’s to make sure we have extra space for people. These are events that have been handled very well and we don’t see much transmission (so far).

Scanning QR codes will be a game changer for the Canucks, as they were previously only required to visually check QR codes and photo ID.

The order won’t go into effect until Monday, allowing the Canucks to play their next two home games, Saturday against the Toronto Maple Leafs and Sunday against the Arizona Coyotes, at full capacity.

This will be the case if these matches are not postponed. The Leafs canceled practice today in Vancouver after two of their players were added to the NHL’s COVID roster. The Calgary Flames, Colorado Avalanche and Florida Panthers all had their games postponed after Christmas.

A total of 73 NHL players were added to the COVID-19 protocol last week, including four Canucks players. The Flames alone have 32 members of their organization (coaches, players, staff) in COVID protocol.

The decision to limit capacity to 50% follows what the Ontario government put in place earlier this week, as the Montreal Canadiens played a game without any fans on Thursday.

Every Canucks game at Rogers Arena last season was played without fans present, while preseason capacity in September and October was limited to 50%. Full capacity had been allowed for regular season games since October 26, as the vaccination passport allowed the Canucks to require everyone in attendance to be fully vaccinated.

“As COVID-19 cases increase in our community, we continue to work closely with local health authorities while supporting each other to keep the community safe as the pandemic continues to evolve,” said said Canucks president of business operations Michael Doyle.

“Our ticketing team is currently working on the logistics of this change and will communicate directly with our ticket holders as soon as possible. In the meantime, fans should keep their tickets.

“The health and safety of our fans, employees, players and community has always been a top priority and we will continue to enforce safety protocols for our Warriors game tonight and Canucks home games this weekend, including including strict mask-wearing protocols. We also encourage all fans to get vaccinated and follow provincial health orders in the days and weeks ahead to help us all through this latest COVID-19 challenge. »

Chronicle: In 2021, we became “adjacent normals” without a script