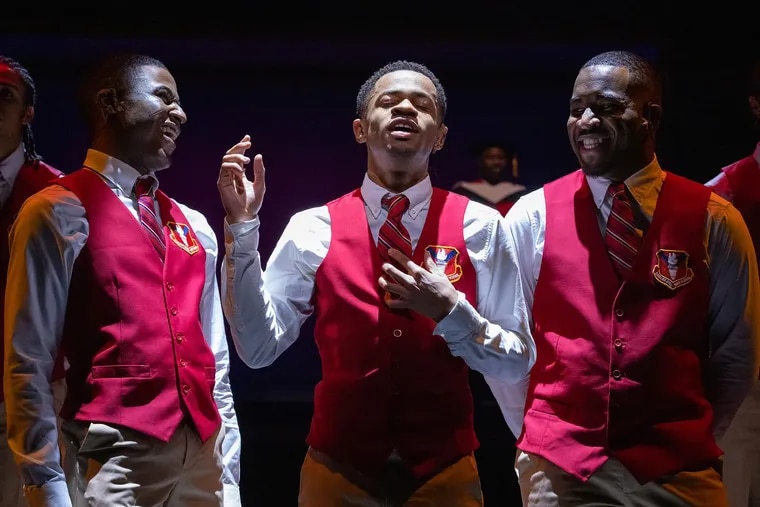 Tarell Alvin McCraney’s choir boy is a coming-of-age story about a young black gay man whose greatest love is singing in his school choir. In this staging by the Philadelphia Theater Company, it’s no surprise: Crystal Monee Hall’s percussive contemporary choir, singer-songwriter and arrangements of gospel tunes are utterly thrilling.

The rest of that Philadelphia premiere, not so much.

McCraney, the recipient of multiple playwriting awards and a prestigious 2013 MacArthur Fellowship, directs the playwriting department at Yale’s David Geffen School of Drama. He is also the Oscar-winning co-writer, with director Barry Jenkins, of the 2016 film Moonlight. This work was also a semi-autobiographical coming of age story that tackled the charged topic of homophobia.

choir boy, which had a brief Broadway run in 2018-2019, is set in an elite all-male, all-black boarding school, the Charles R. Drew Preparatory School for Boys. Akeem Davis weaves his way through the role of uncertain director Marrow as the clunky script keeps asking whether he’d rather be respected or feared. The school’s values ​​seem, at best, a work in progress – much like its students.

The director’s explosively angry nephew, Bobby (Jeremy Cousar), is one of his main challenges. Bobby’s main target is the new choirmaster, the prickly Pharus, whose obvious gender nonconformity is a provocation. Justen Ross takes on the role with stereotypical, over-the-top effeminacy and speaks so quickly that his dialogue is often indecipherable.

Rounding out the chorus are Tristan André, as Bobby Junior’s ally; the likeable Jamaal Fields-Green as Pharus, AJ, and Dana Orange’s roommate, adding urgency (and singing beautifully) as the troubled David, who doesn’t even have a phone to call home.

A white teacher, Mr. Pendleton (PJ Benjamin), inexplicably wanders out of retirement and into school strife. His role is to encourage critical thinking and restore harmony, or at least civility, between the five warring boys, both in the classroom and in the choir room. With a background in civil rights protest, he means well, but his effectiveness is undermined by his ignorance of black youth culture.

The shortcomings of the show cease to matter when the five members of the choir start singing. They are first-class singers, and their a cappella renditions of numbers such as the civil rights anthem, “Keep Your Eyes on the Prize,” and the 19th-century witty, “Sometimes I Feel Like a Child Without mother”, are dazzling. Page’s choreography adds a little Motown tingle.

Another highlight is PTC’s evocative physical production. Set designer and lighting designer Christopher Ash frames the action with pillars arranged like crosses, emphasizing the Christian context, and dynamically lights the show in bold neon colors that suggest stained glass. Nothing subtle here either, but nice to see.

Presented by the Philadelphia Theater Company at the Suzanne Roberts Theater, 480 S. Broad St., through March 13. Masks and proof of vaccination, including boosters for those eligible, are required. Tickets: $45 to $55. Information: www.philatheatreco.org or 215-985-0420.