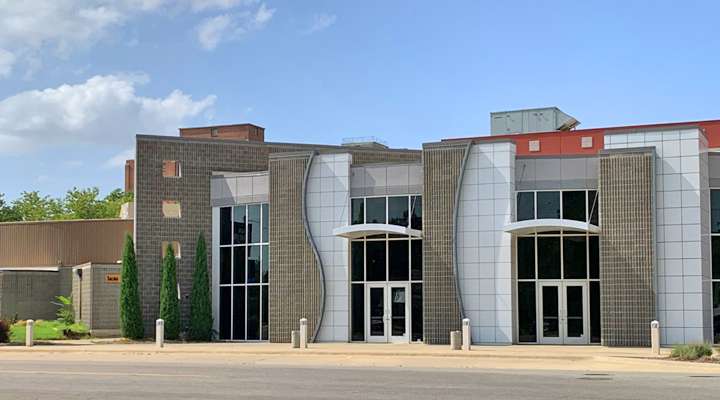 Performances at the Salina Theater draw more people than ever before outside of Saline County. The organization is also in the early stages of developing the concept for building a new stage store at its campus on E. Iron Avenue in Salina. That’s the word from Salina Theater Executive Director Michael Spicer during an exclusive interview with Salina Post earlier this month.

“The reach of what theater is doing now is wider than it’s ever been,” Spicer said.

The Salina Community Theater Association was first organized in 1960. At the time, there were no buildings dedicated to the theater or to community members who supported local theater.

“The organization moved to different places, even to Indian Rock Park in the summer, sometimes to the high school building in Washington,” Spicer said.

In 1968 the theater board realized it needed its own building. The Theater raised $213,000 for construction and equipment.

“In 1972 when the Kephart Theater was built, which was a defining moment in our organization,” Spicer said. “When you have a home where people can find you and you’re constantly there, you start to build a production pattern that makes sense to you.”

“The Addams Family” marked the 350th subscription production for the Salina Theater.

“These are just main stage performances, that’s not even counting Center for Theater Arts performances,” Spicer said. “When we counted all shows including the CTA, there were 582 rows on the Excel spreadsheet.”

Spicer arrived at the Salina Theater in 1997, making his 26th season with the theater that year. The measurability of ticket dollars spent each year was not readily known when Spicer first arrived.

“In 1997 when I came here, we just didn’t have the stats. But when we started collecting them over a decade ago, about 30% of ticket sales came from outside the county. of Saline. After about a decade of being here, we had increased that to 40 percent,” Spicer said.

This trend of dollar inflows from abroad continues. According to Spicer in the two most recent musicals, Naughty boots and The Addams Familynearly half of every dollar spent on ticket sales came from outside Saline County.

The continued growth in regional sales follows the renaming of the theater from Salina Community Theater to Theater Salina. The name change, which took place earlier this year, took years and was delayed due to the COVID-19 pandemic. After theater board members held roundtables with patrons, community members and business leaders, the board decided to change the name to accurately present their motive to visitors and tourists who might have a preconceived idea when they hear the words “community theatre”. ”

“One of the most common conversations I have is that when our long-time clients and volunteers bring people from outside the area to see shows here, one of the most consistent comments is ‘ it doesn’t look or sound like community theatre,'” Spicer said. “And when they see ‘The Play that Goes Wrong’, ‘Kinky Boots’ and ‘Addams Family’ productions, their notion of what community theater is broadens.”

The Salina Theater has supported children’s programming since its inception, bringing a variety of traveling productions for young people. The Salina Theater for Young People (STYP) was the first incarnation of a structured program for children. Over the years, the name of the program has been updated to Center for Theater Arts (CTA). Classes offered to students have expanded to include acting, singing, musical theater and dance classes for all ages. According to a CTA brochure, it’s the only performing arts academy between Topeka and Denver.

In 2011, the theater was extended to meet the needs of CTA’s growing list of students.

The COVID-19 pandemic has impacted daily life at the theater, including the wearing of masks on stage and increased social distancing measures for cast and crew. However, student enrollment at CTA has not been greatly affected.

“Our enrollment is down a bit during COVID, but only down to around 275. This year we have 353 student enrollments,” Spicer said.

Salina has a variety of after-school sports teams for young people, but Spicer spoke about the importance of theater education in the lives of young people.

Maggie Spicer Brown, is the Educational Director of Theater Salina. Brown grew up in the Salina area and was very active with the Salina Theater. She graduated from Salina South High School in 2010.

“The Salina Theater raised me so I am very fortunate to help be part of the training of our Education Department which in turn will raise our current students to be the best versions of them. themselves,” Brown said.

Brown was offered the job after Megan Coberly, former director of education at CTA, moved to New York with her husband who currently works at Columbia University.

“The program was left to me in great shape, so I’m very lucky to be able to continue to build on that and develop it further,” Brown said.

Brown earned her Bachelor of Music degree from Oklahoma City University before moving to New York City, where she lived on and off for most of seven years. During this time, Brown worked as a professional actor with favorite credits including Mom Mia and Matilda at Casa Manana in Texas, terrible friday and A little night music at the Lyric Theater of Oklahoma and the North American tour of The Wizard of Oz. Brown was also able to choreograph numerous musicals at the Salina Theater, as well as pieces for the summer contemporary shows.

“Before, as a teacher, choreographer and director, I was a little more one-on-one with the students, so my decisions turn into larger ideas than just immediate preparations for rehearsals and classes like before. “Brown said. “I’ve really enjoyed it so far. Teaching theater is so important, our students enjoy theater as their safe space and home away from home and our teachers are passionate. That’s what makes this job so easy to love.”

Future constructions and upcoming season at the Salina Theater

Spicer also told the Salina Post that the Salina Theater has preliminary plans to build another series of educational studios and classrooms along E. Iron Street.

“What we will hopefully build is a new stage shop, two more dance studios, three vocal performance studios and a parents’ lounge on land along Iron Street. That means we have to go to town and ask them to give us land at Founders Park,” he said.

The Salina Theater campus is also in preliminary talks to build a new stage store on its campus in Salina.

“We are in the very early stages of the next evolution of this campus. And this is driven by our need for more storage space. We could build a storage facility and make it bigger than what we have now and make it air conditioned and secure,” Spicer said. “But that would not be in the interest of the river project. As the footpath passes they don’t want to have a storage building there. »

The theater considered the cost of purchasing land and building a remote storage facility off campus.

“When we counted what it would take and the hours of work and the transportation to go back and forth between But to go several miles, gets our set manager, JR, out of the building and that gets him out of the building, which slows down our process,” Spicer says.

According to Spicer, the best solution to their problem was to build a second, newer stage store – and he knows exactly where they want it.

“Where it should have been built the first time, which is based on the theater theory that James Hall Miller created, that Charles Shaver designed in this facility,” Spicer said. “The stage store should have been built directly behind the stage with two large doors, so you could take scenes in a big circle.”

This project would also include a possible turntable integrated into the floor of the stage.

The turntable would allow us to move the set. It would be an exciting possibility. And we are now investigating the cost of that,” Spicer said.

The theater is also looking to improve its lighting characteristics by installing a permanent LED wall on the upper part of the stage. According to Spicer, this will replace the need to project scenes onto a screen, giving audience members an ancillary design element.

The theater board is also reviewing contracts for next season’s shows, which will be the 63rd season at the Salina Theater.

“It’s always a long process. It’s the committee that probably meets more often and more regularly than most other committees. This one does it every two weeks from August to December, sometimes even January, February , depending on how long it takes us to find the season that makes sense to us,” Spicer said.

“We’re doing four musicals this year, because we’re re-engaging our partnership with Kansas Wesleyan to do a fourth musical. And so the discussion is, next year, will we do four non-musicals and three musicals? I think that we’re going to be doing four musicals again next year for a number of reasons, some artistic and some financial, but we don’t yet know what that will mean.

The upcoming shows at the Salina Theater are as follows.

The Savannah Sipping Societyfrom February 3 to 19

Something Rotten: The Musicalin partnership with Kansas Wesleyan, from March 31 to April 15

School of rock: the musicalJune 9-25