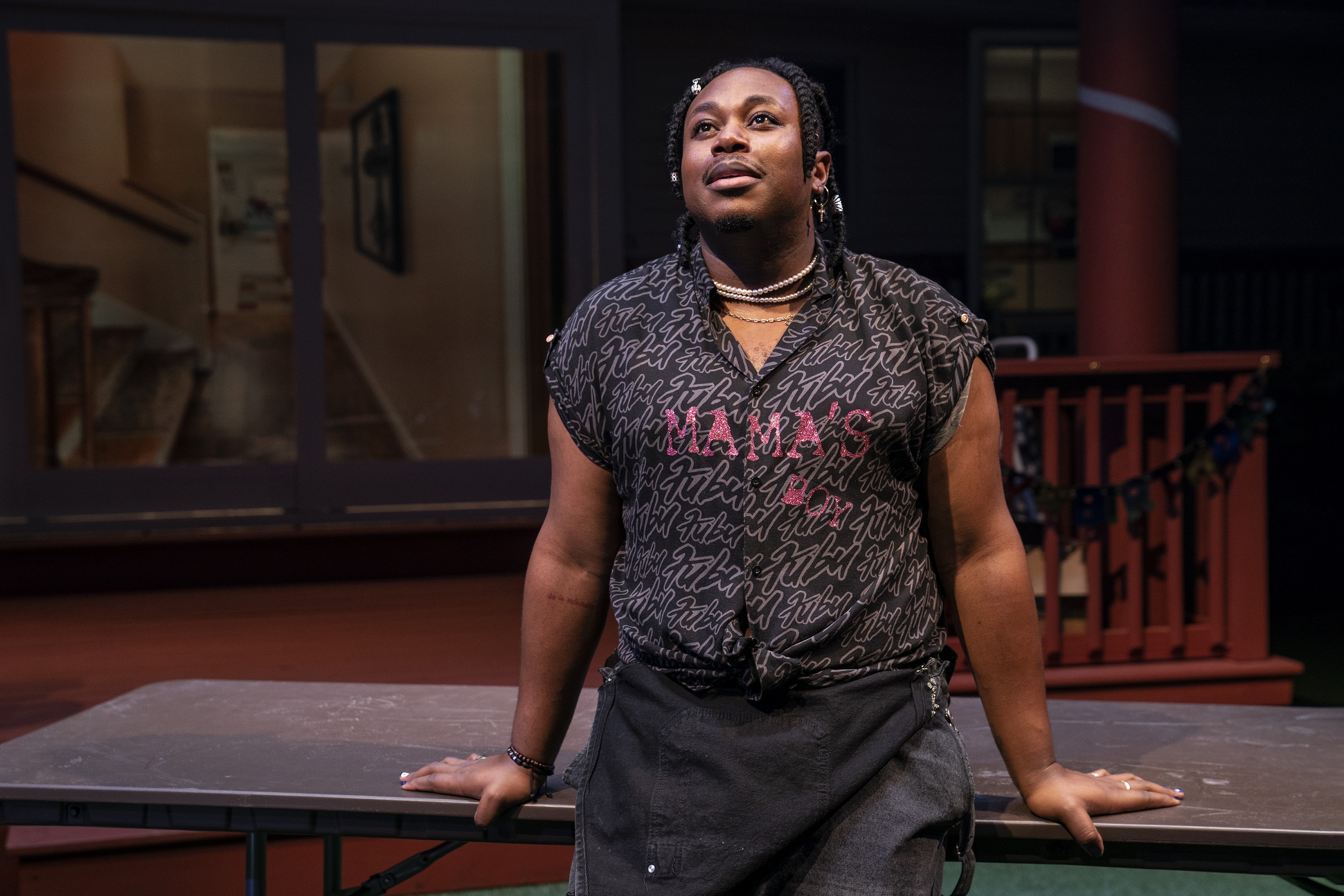 The good news is that James Ijames Fatty ham is an embarrassingly beautiful noir perspective on rejecting evil. It’s also performed sensationally by its cast of multi-talented scene-eaters and under the fantastic and seamless direction of Saheem Ali. There’s no bad news to report on this recently opened play at the Public Theater except that it’s one of the hardest tickets to get in New York, despite having been extended until the 3 July.

A co-production between the National Black Theater and the Public Theatre, Fatty ham was recently awarded the 2022 Pulitzer Prize for Drama and received much fanfare for “reinventing” Shakespeare’s masterpiece, Hamlet. As fun as it sounds, “reinventing” isn’t quite accurate. As Ijames explains in his program notes, although Hamlet inspired him, this piece is not about the sulky Dane.

Yes he features a sulky, black, fat, queer man as the main character who, at key moments, recites three of Hamlet’s soliloquies, as well as a host of dubbed characters who riff on their backgrounds with the ghost of a father pushing his son to murder his uncle. But beyond these similarities, this is an entirely new piece.

Example : Fatty ham ends in 100 minutes, instead of Hamletthe usual running time of three and a half hours. And no production of the latter has ever reduced me to alternating between trying not to pee my pants from laughing so hard, puffing out my guts, getting up and screaming, or falling off my chair in delirium.

If theater is meant to be a cathartic experience, this piece left me feeling all at once, all over my body, pretty much all the time.

Fatty ham begins with no exposition or attempt to immerse us in its humor. It’s funny right off the bat, though we’ll need a full scene to decipher the particular cadence of these characters and understand how they work – a brave move on Ijames’ part for resisting the urge to feed the spoon-fed audience, and extra kudos to Ali for rejecting the impulse to dumb things down. On the contrary, Ali’s confident direction takes the production to even greater heights than is evident in the script.

Soon, Pap’s ghost visits and urges Juicy to exact revenge on Rev, who he believes ordered her death. Juicy, a nice but moody kid with more sugar in his ass than venom, doesn’t feel it. But he decides something has to change after his uncle exerts his toxic, homophobic hold on the house.

Although Rev delights and keeps Tedra sexed up, he’s just as abusive as Pap was. While pretending to bond with Juicy, he punches him in the stomach, making it clear he’s in charge. He also tastelessly reveals that he and his mother used Juicy’s tuition money to renovate their bathroom. Tedra loves Juicy, but she blames her for cheering Rev on and refuses to rock ship lest she lose her identity as a sexy, laid-back wife – because she’s not meant to be alone.

As she tells Juicy, “Listen baby, I went from my daddy’s house to my husband’s house. I have never been alone. I need noise. Agitation makes me happy. This is true even if she has no idea what she wants beyond a ring on her finger or disagrees with her men on how to handle things.

Family friends Rabby (Benja Kay Thomas), daughter Opal (Adrianna Mitchell) and son Larry (Calvin Leon Smith) arrive to celebrate the wedding barbecue but soon add to the drama. The siblings, both gay, are ruled by their God-fearing mother, who insists on traditional “decency” even though she has her own past.

Meanwhile, Larry is a Marine and suffers from the trauma of murdering people in other countries – even though he knows he wants to kiss Juicy but can’t bring himself to in case someone catches them. Larry abstains to survive but reveals what lies behind in a fiery reflection on what he sees in Juicy.

“I can see the steam rising from you and it makes you look like a little deity,” he whispers steadily and seductively. “It makes you feel closer than you actually are. If I was like you…I probably would have saved someone’s life. He completes this moment by asking Juicy to save him – the tragedy is that he has everything he needs to save himself but is too bound by homophobia to see it.

“What would your life be like if you chose pleasure over evil. —Tio, Fatty ham

The wedding festivities resume with a karaoke night, during which Tedra raps “100% Pure Love” by Crystal Waters and spells out her love on Rev’s lap with her hips (fantastic choreography by Darrell Grand Moultrie). Much to Rev’s chagrin, Juicy takes the mic and casts a spell that turns the entire party into a horde of zombie-like headbangers with her screaming rendition of Radiohead’s “Creep.”

That line silenced the entire audience around me as we embraced words we’d surely heard before but never so elucidated through this revealing context. Tio responds to the entire worldview in which he, his family, and us, the audience, are currently chained – a view that criminalizes the possibility of being gay. By pairing fatty ham mindless shenanigans with unexpected nuggets of joy, Ijames allows his many simple truths to resonate as if they were the words of a wise god.

Watching these characters let go of their almost predetermined violent patterns helped me realize that salvation often comes down to deciding to do something else. Maybe we can’t just decide to be happy, but we can avoid being miserable and choose, instead, to revel in a dance party like these characters ultimately do. Watching Larry return to save himself while dancing to Maruti Evans’ magically transformed set lifted the entire audience to their feet without caring how stupid we might be to outside observers. If that’s what Ijames and Ali want us to remember Fatty hamI am here for the gospel.

Fatty ham plays at the Public Theater until July 3.