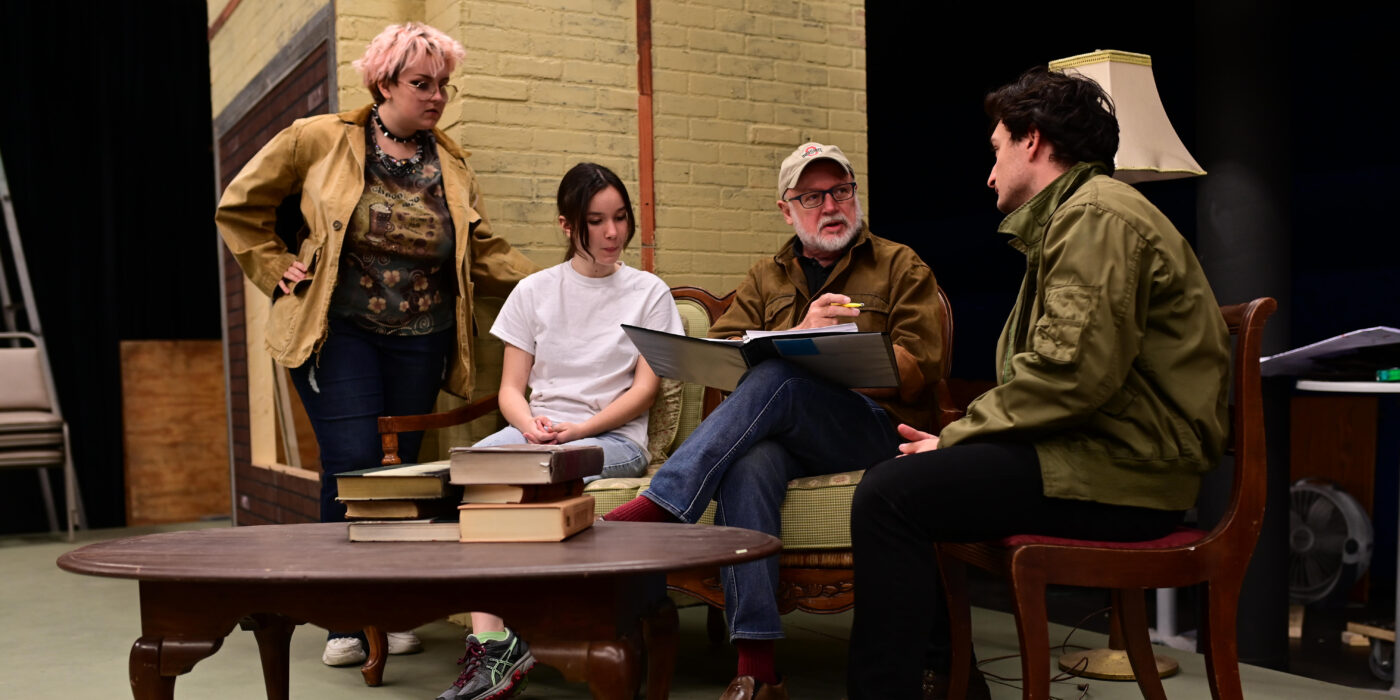 In ‘The Science of Leaving Omaha,’ Cast Outshines Script

Carter Lewis, center, with the cast of “The Science of Leaving Omaha.” Photo of Danny Reise | Courtesy of the source

On November 18, the Performing Arts Department presented “The Science of Leaving Omaha,” an original play written by Senior Playwright-in-Residence Carter Lewis. The three-way show was performed at the AE Hotchner Studio Theater.

The play follows Iris (junior Melia Van Hecke), a young woman who works night shifts in a funeral home. The set consists of beautiful orange walls, a cozy sentimental section of his patroness Mrs. B, and in the middle a table with a body bag on it. On the night of the story, Mrs. B asked Iris to work the night, because they have a body on hand and she thinks a body can’t go to the “other side” unless someone be with them. Iris is occupying her time working on a short story explaining why Omaha is a “sucker” city that she desperately wants to leave behind.

Iris is incredibly neurotic and a little childish, but the night progresses like any other night. She spends every shift alone, except when Sally the security guard (freshman Taylor Miller) comes to check on her. After a while during this seemingly normal shift for Iris, someone starts knocking aggressively on the door. Knowing it’s not Sally, Iris tells the person that she can’t be there because the person is getting more and more aggressive. Unprotected, Iris calls Mrs. B to tell her what happened because that’s all she knows how to do. Suddenly, the man (Senior Nathaniel Holmes) bursts through the window, exclaiming that he must enter the building as the corpse is actually his sister Ruth Ellen.

The man tells Iris his name is Baker – not Mr. Baker, which Iris automatically calls him even after crawling through his window – and he constantly asks what will happen to Ruth Ellen so he can all know about the process. Iris is uncertain, and her uncertainty makes Baker increasingly angry; the more she apologizes for her lack of knowledge, the more he berates her for not knowing. Although neurotic from the start, the true extent of Iris’ nervousness becomes clear during this scene, thanks in part to a stellar performance by Van Hecke.

Eventually, Baker reveals that Ruth Ellen is his wife, not his sister, and he only lied to get Iris to let him in. They had only been married 27 hours, but after getting into trouble at a bar, they eloped and Ruth Ellen died on the run. Afterwards, Baker and Iris agree to work together to understand the cremation process, and they have a sweet but odd conversation about the difficulties in their lives and their views on love.

The empty stage of “Omaha” before the start of the show. Photo of Jordan Coley | Student life

Iris reveals that her mother was an absent alcoholic, and Baker recounts how he and Ruth Ellen were both estranged from their families. With Van Hecke’s fine acting, Iris opens up about her fears of never being loved and never leaving Omaha.

Then the play’s plot gets a bit convoluted and falls apart once it has to choose a concrete direction. Baker and Iris suddenly and shockingly decide to run away together, but just before they can leave, Sally, the security guard, comes to check on Iris and senses that she is not alone. To cut short a long and narratively illogical story, Sally and Baker argue over whether or not Baker should be taken into custody for breaking and entering. Iris’ bravest and most outspoken moment in the series is when she defends Baker from her friend. In what is perhaps the most confusing part of the series, Baker suddenly sprints out of the building and is then shot and murdered by the police. Sally follows him, gunshots ring out in the distance and Iris falls to the ground in tears.

From the moment Holmes stands on stage as Baker, he is gripping and I found myself supporting him despite his lack of character depth due to Holmes’ superior playing. Van Hecke also captivated audiences throughout the show, giving a nuanced portrayal of a deeply anxious and scared young woman.

The actors’ performances made up for the fact that the script itself was lackluster in several respects. In addition to the improbability of the story, a single line about eating disorders seemed unnecessary and, quite frankly, disrespectful. While Iris spends a lot of time on the phone with Mrs. B, the audience never sees or hears the character, which makes it clear she’s purely a plotter. Iris cracks jokes that sound like an old man, and Sally’s character feels out of place on the show, like a failed attempt at comic relief. The cast of “The Science of Leaving Omaha” is truly stunning, but the show itself doesn’t have the same merit.