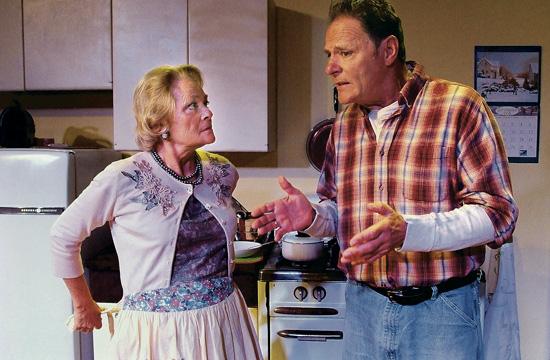 “Leaving Home” – The Ruskin group’s play has hits and misses:

The ‘kitchen sink realism’ style of theater, along with other art forms, popularized in Britain in the late 1950s and 1960s, brought domestic challenges to light. of the daily life of the working class. David French’s “Leaving Home” clearly falls into this genre as it explores the dynamics of a particular dysfunctional family.

The story revolves around the Mercers, a family who moved from Newfoundland to mainland Canada and settled in what is clearly a working-class neighborhood, as exemplified by the excellent setting by Cliff Wagner, who uses the loft extremely well. limited space.

Mary nervously sets the table for a rehearsal dinner in honor of Billy’s impending marriage to Kathy (Sierra Barter). There is tension in the air as she urges her sons not to upset their father, who can spiral out of control in a split second.

Jacob comes home from work in a good mood, sings a song to Mary, hugs her and does a little dance to music designed by Chip Bolcik.

In no time, Jacob becomes a raging bull, with his tirade directed at his eldest son Ben.

This son just graduated from high school but avoided inviting his father to the ceremony for fear he would be disruptive. He and his dad don’t get along, dad sometimes taking the strap off him. He is moving out and considering renting a room in Billy and Kathy’s house, but at his mother’s request, he has not yet told his father. At the same time, the impending nuptials are what we would call a â€œshotgun wedding,â€ as it looks like Kathy is pregnant with Billy’s child.

Jacob is extremely unhappy with the marriage as Kathy is Catholic and Billy is about to convert – an action Jacob finds reprehensible due to his terrible childhood memories of violence against non-Catholics. He decides not to go to church that night for the rehearsal, which brings some relief to his wife, who is also worried about his behavior, and is still interfering with her. husband and sons.

Anyone who has ever known an alcoholic will painfully recognize Jacob’s unpredictable mood swings, powerfully portrayed by Mulkey in what is a haunting performance. He fully captures the mercurial tantrums of his explosive character and the tension in this house is palpable. Her entire performance is filled with a resounding subtext that communicates as loud as the text. Due to his erratic behavior, the family tries to walk around on eggshells, but in this case, those eggshells crack as Ben goes after his father, despite the possible physical consequences.

Soon the bride-to-be walks in with a sad face and we know something has happened. She miscarried and reluctantly shares this news with Billy, who instantly sees his way out of the wedding engagement because he really feels too young to get married. He asks Kathy to postpone the wedding until he finishes school. She is not happy with it.

Kathy’s mother, Minnie, hosted by Mary Carrig, is a flamboyant character whose high energy brings some relief to the busy atmosphere in the Mercer House. His escort is Harold (Chip Bolcik), a gentleman of few words. In fact, he doesn’t say a word as his character doesn’t have a dialogue, but is actually about to steal the show with his almost comatose demeanor – a welcome and comedic distraction from all the stories emanating from the scene. .

Minnie and Jacob have a romantic story and she doesn’t hesitate to show it off in a sexy dance around the small kitchen. In no time, Kathy announces to everyone that she has lost the baby. Minnie explodes, spitting insults at her daughter, calling her a “litter bitch”. Kathy responds in the same way, calling her mom something akin to a slut. Minnie yells that the invitations are printed and that she will become the laughing stock of the town if the wedding is called off. Poor Marie. She does her best to keep the peace, but she too has emotional outbursts directed at her husband, Ben and Minnie.

With all the emotional upheavals throughout the play, one way or another, after all, Jake and Mary renew their love for each other, which clearly takes place offstage as well, as Mulkey and Landry are in fact husband and wife. What a pleasure to see them working together.

The problem with this production, as performed by Barbara Tarbuck, is the patchy performance as well as the occasional blockage. Mulkey and Landry give fully updated and captivating Broadway-caliber performances and fill the stage with their presence. Sadly, the actors playing the sons, as well as the actress playing Kathy, didn’t rise much above line reads, which you would expect to see in an unprofessional community theater production. These budding young actors need more directing training, including how to develop a subtext and stage presence. I would encourage them to perfect their craft by making studio productions similar to what Actors Studio does. Critics are permitted to attend student productions, with the understanding that they will not write reviews. This gives novice comedians a chance to develop their technique in a protected environment, which in this case director Tarbuck failed to do. She exposed their weaknesses by putting them in roles they weren’t quite ready to handle, doing a disservice to those young actors who did their best with material above “their pay grade. “.

That said, despite the amateur performances of some of the cast members, it’s worth seeing this production to experience two outstanding pros who deliver impeccable magnetic characterizations.

Family secrets, humor at the center of the new Penobscot Theater play