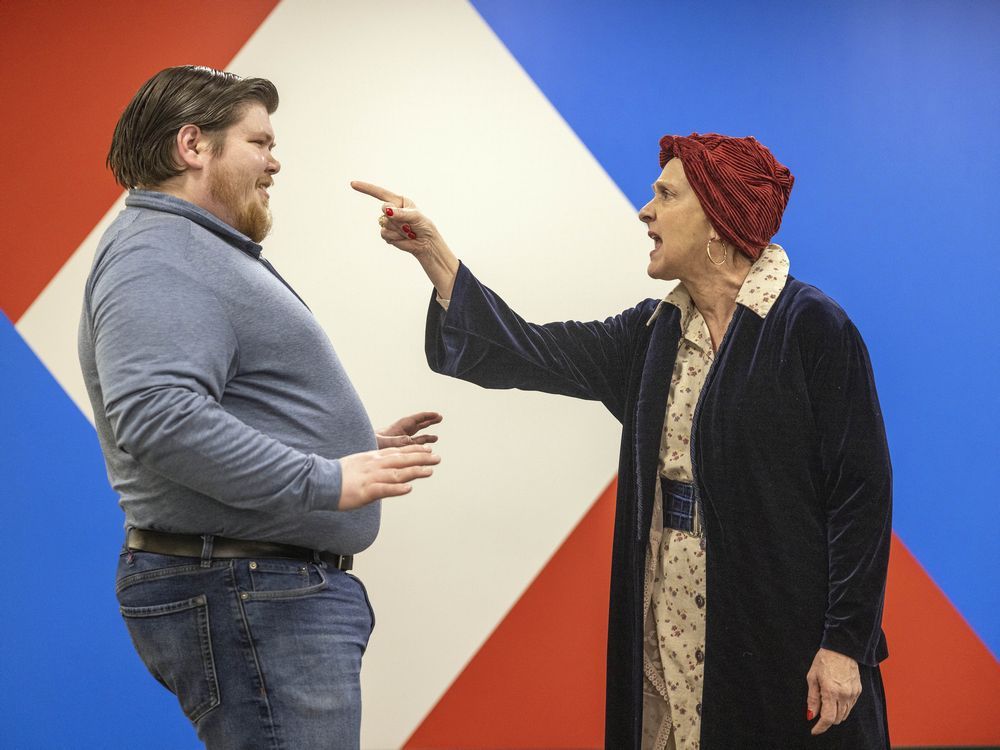 David Sealy has waited a long time to present The Weavers to the public.

Sealy wrote an early draft of the play in 2012 as part of his submission for the City of Regina Writing Award, which he won. The project was then shelved until a recent opportunity arose through On Cue Performance Hub Inc., a new non-profit organization that provides resources for local independent artists to bring to life to their ideas.

Thanks to this collaboration, The Weavers is set to premiere this week at the University of Regina’s Shu-Box Theatre. It’s the first of five shows over the next three months that make up On Cue’s inaugural season.

The Weavers performance takes place on Thursday, Friday and Saturday evenings, in addition to a Saturday matinee.

“I’m a fan of those old black-and-white crime movies and it’s kind of a modern take on film noir,” explained Sealy, who spent several years honing the script. “I would kind of retire it, try a (new) version once in a while. Finally, thanks to On Cue Performance, I really sat down and worked it all out last year.

The play is a comedy that revolves around two characters: Ida Red Weaver (played by Julianna Barclay) and Nathan Plimsoll (Adam Milne). Ida is an 81-year-old woman isolated on her prairie farm in the middle of a blizzard. The plot begins when a mysterious character, 27-year-old Nathan, shows up at her door.

“They’re two sleazy characters sizing each other up in this dreary wintry rural setting,” Sealy said. “They both have hidden agendas. What do they want from each other? This is the big question.

The humor comes from the fact that Ida “is far from a frail, weak person who is just a little ripe for the picking.”

Nathan finds out the hard way.

“She’s not a victim,” Sealy continued. “She is basically a survivor. A lot of things happened in his life. He’s a strong person. She still has big plans. And maybe when the young man shows up, you might think, “Oh, we’ve got a breeze here.” But he would be wrong.

Sealy is part of a five-person production team that also includes two actors as well as stage manager Gillian Barker and director Alan Bratt. On Cue brought them all together in addition to providing experts for set design, lighting, costumes, and more.

“This is a golden opportunity for me,” Sealy said. “Any artist could really benefit from working with On Cue. I’ve had work produced before but, honestly, it was more (a situation where) you hand the play over to a theater. It’s much more of a hands-on experience.You have the opportunity to interact more closely with other theater artists and get a better idea of ​​what the whole production process is and what it takes to make a play. I feel like it was a really great learning experience.

In the past, Sealy had to juggle writing projects with his day job, but now that he’s semi-retired, he has more time to pursue his passion.

Sealy has previously worked with the Globe Theater as well as the University of Regina. He also had a longer original play, The Bob Shivery Show, produced several years ago by Calgary’s Lunchbox Theatre. He would like to return to it now that On Cue has opened up the possibility.

“It’s a fun play – a bit bigger concept with more actors,” he added. “Having learned what I did through On Cue helping me move The Weavers forward into production, it would be a challenge, but it would be a fun challenge. Now let’s try a bigger and more complicated job and see how far we get.

More details about The Weavers, including ticket information, can be found at oncueregina.ca.

REMARK: On Cue offers audiences a behind-the-scenes look at the process of creating a selection of new pieces that will soon be performing on Regina stages. The event – Creative Mind: New Work in Progress – takes place March 10 (8 p.m.) at The Artesian. This is a ticketed event with a suggested ticket price of $15. Proceeds go to help On Cue provide more events and productions that support local artists.

News seems to be flying towards us faster all the time. From COVID-19 updates to politics and crime and everything in between, it can be hard to keep up. With this in mind, the Regina Leader-Post has created a Afternoon titles newsletter that can be sent to your inbox daily to ensure you are up to date with the most vital news of the day. Click here to subscribe.

Sign up to receive daily news from Regina Leader-Post, a division of Postmedia Network Inc.

Thank you for your registration!

A welcome email is on its way. If you don’t see it, please check your spam folder.

The next issue of Regina Leader Post Headline News will soon be in your inbox.

We encountered a problem during your registration. Try Again

Games don’t have to aspire to be movies