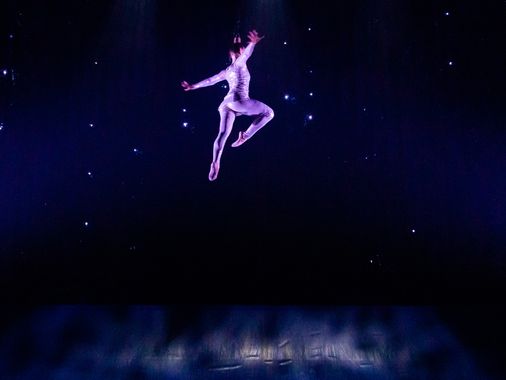 Reindeer games, roller skates and aerial exploits in Cirque du Soleil’s “It was the night before…”

Visions of sugar plums, a jolly old elf, and the prancing and squawking of reindeer hooves – the imagery of Clement Clarke Moore’s “A Visit from St. Nicholas” instantly conjures up the magic of Christmas. It’s no surprise, then, that Cirque du Soleil, the Montreal entertainment company that reinvented the circus arts, brings these images to life with “‘Twas the Night Before…”, an evening of gravity-defying acrobatics using Moore’s poem as Setting. The show is coming to the Boch Center Wang Theater from November 25 to December 25. 11.

“We usually first build an acrobatic skeleton for a show,” said James Hadley, creator and director of “’Twas the Night Before…”. “But for this show, the poem came first.”

The poem functions as an inner setting for a story about Isabella, a teenager who has become jaded by the high-pressure expectations of the holiday season. Although she is no longer interested in the family tradition in which her father reads “A Visit from St. Nicholas” aloud, when she opens a gift he gives her, it transports her to a winter wonderland. of the poem.

Hadley says some of the performances use specific imagery from the poem, including Isabella being lifted into the sky by straps (“like the leaves before the wild hurricane flew”); an acrobatic table number that imagines “children snuggled up warm in their beds” unable to fall asleep or even remain seated; a “sleigh full of toys” delivered through the overhead antics of a hotel cart; and reindeer, in the form of hoop divers, landing on the roof.

Other acts include a pair of roller skaters performing on a “frozen lake” with an incredibly small circumference, performing lifts and dips and spinning at breathtaking speeds, as well as “Sharing the Spark”, in which “Les Tuques” – mischievous elves – dance with a spark of light that takes Isabella into the world of adventure.

Since this production is performed indoors rather than in a marquee, there are no trapeze acts, and Hadley says there is a greater use of dance and movement to bond. more fluid between the different parts of the poem and the circus routines.

While the poem creates certain parameters for the design and order of the acts, Hadley says it also provides flexibility. When Isabella is transported to a magical world, there’s room to play with imagery, like having her greeted by Jolly, a juggler who tries to put her at ease.

“There are iconic images,” he says, “but there are other moments that I hope will surprise audiences.”

There are also musical surprises, he says, courtesy of Cirque du Soleil composer-arranger Jean-Phi Gonçalves (“Alegria” from Cirque). Gonçalves wrote new arrangements of familiar Christmas carols, including “Angels We Have Heard on High”, “O Christmas Tree”, “Do You Hear What I Hear” and “Joy to the World”, as well as new music for accompany the circus acts and ensure the transitions between the scenes.

IT WAS THE NIGHT BEFORE…

Terry Byrne can be reached at [email protected].