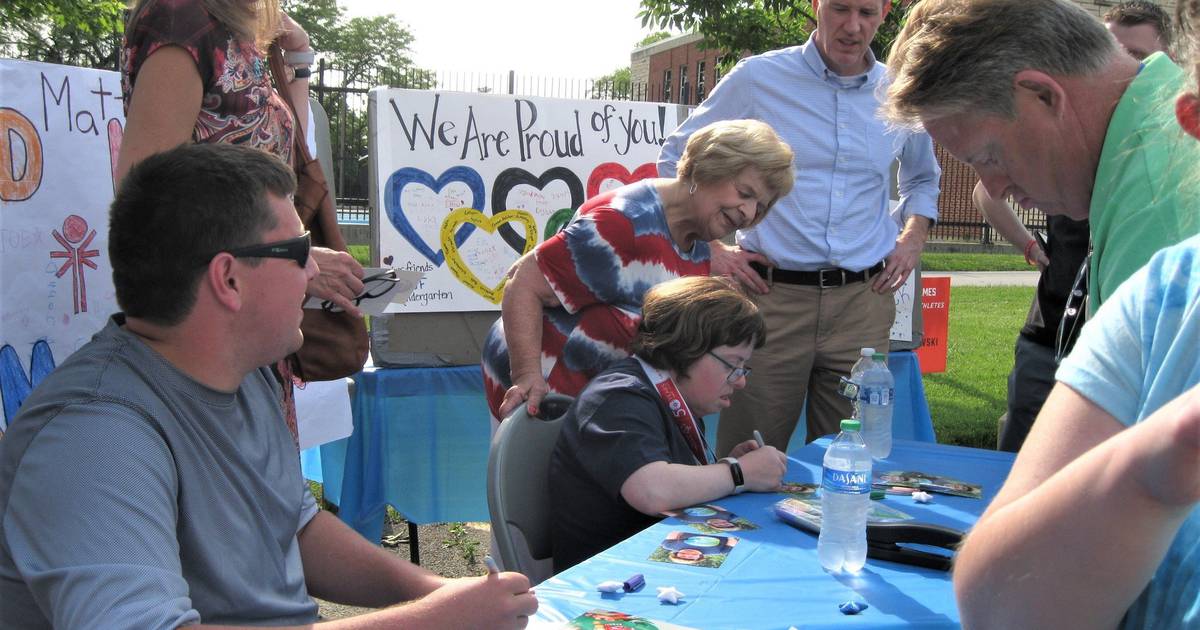 Under sunny skies at Mount Greenwood Park, Special Olympics athletes Karyn Mrotek and Matthew Buck shared the spotlight in an impressive start to their upcoming competition at the 2022 Special Olympics USA Games. June in Orlando, Florida.

Under police escort, Mrotek and Buck arrived in a convertible convertible, accompanied by their coach Lisa Wisniewski. Friends, family, local politicians, and even members of the Chicago Fire and Police Departments cheered and applauded their arrival.

For decades, Mrotek, of Palos Heights, participated in Special Olympics activities, including gymnastics, basketball and swimming, but was never chosen to compete nationally.

Now 43, having survived two heart surgeries and now wearing a pacemaker, she will compete as one of four members of the Illinois Special Olympics bocce ball team.

Mrotek, who has Down syndrome, worked for 15 years at the Marcus Orland Park Cinema, keeping the lobby tidy and the snack station stocked with napkins and cup lids. Now she works in a similar capacity, helping to keep ACE Therapies running smoothly at Merrionette Park, which provides therapy for children with disabilities.

Since the age of 5, she has attended Mount Greenwood’s special recreational classes three days a week.

“I think it’s been an outlet for Karyn’s athleticism, but more of a social outlet,” said her mother, Donna Mrotek, who retired five years ago after a career in tech. information at the Palos Community Hospital.

The two women have made lifelong friends through Mt. Greenwood’s Special Recreation Program, which knows no community boundaries and is open to children and adults with mental disabilities. “It was more about our own little community,” Donna Mrotek said.

Along with Mrotek’s mother, a few close members of this “community” will stay at Disney World to encourage Mrotek.

Buck, 23, from Tinley Park, hasn’t let autism hold him back either. He has participated in the Mt. Greenwood Special Recreation Program since he was 8 years old and has participated in a variety of sports including gymnastics, bowling, weightlifting, basketball, bocce, kayaking, golf, snowshoeing, archery, softball and swimming.

In Orlando, Buck will compete in three swimming events: the 4×50 medley relay, the 100-meter breaststroke and the 100-meter freestyle.

Buck attended the special needs program at Clissold Elementary in Beverly and graduated from Lincoln-Way East High School after his family moved to Tinley Park. He is now enrolled in the Adult Transition Program at Lincoln-Way Central.

Like Mrotek, he also works and has held part-time jobs at Hickory Farms, Alsip Nursery and TJ Maxx. His dream job would be to work at the Imagine Theater near his home, according to his mother, Kathleen Buck.

Buck’s mom, dad, brother and two sisters will go to Orlando to cheer him on.

Later in the ceremony, Clancy also wowed the crowd with an enthusiastic shout of support. She was one of 10 Special Olympics ambassadors who addressed the crowd and wore a bright green shirt as a show of support.

Among the ambassadors were medalists and ribbon holders, figure skaters, skiers, gymnasts, archers, swimmers, softball players and bocce players who had traveled for competitions to U.S. cities and destinations beyond, notably Graz, Austria.

News from the southern suburbs delivered every Monday and Wednesday

“Thank you for being there to wish me luck,” Mrotek said.

“I want to cheer on other athletes and past athletes,” Buck said. “Thank you to the coaches for encouraging me as well.”

Coach Wisniewski also walked away with a special token of appreciation – a wooden cutting board in the shape of the state of Illinois.

The crowd stayed for refreshments as Mrotek and Buck sat at a table to autograph photos.

Susan DeGrane is a freelance writer for the Daily Southtown.