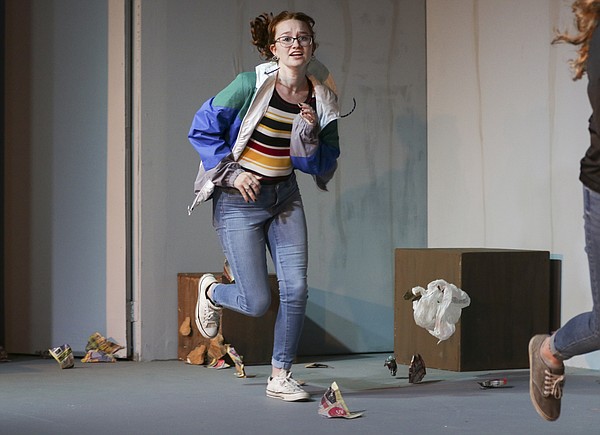 The final inspiration for the Curtis Treat script didn’t come until the end of the process, but when it did, it wrapped it all up perfectly.

Mark 9:24. It’s a scripture that spoke and has stayed with Treat ever since, and it has a central role in his new play, “God in the Machine.”

Directed by Curtis and Candy Treat with Debbie Starr as assistant director, “God in the Machine” – a story of grief, uncertainty and, ultimately, hope – opens at 7:30 p.m. today at the Stained Glass Theater.

The original Curtis Treat storyline takes place in an Oklahoma fallout shelter during a series of tornadoes. An eclectic group gathers for shelter, and while they’re confined to the shelter, they can’t help but begin to confide. Each character brings their experiences with God to the table, and when James, a teacher in his forties, rejects a call to prayer with the uncertainty that it won’t help anyway, the group falls into conversation.

Those who go to see the play may sense an overarching theme: life isn’t easy.

“Life is not for sissies,” says one character, “so saddle up.”

With a cast of just 10 people, finding the right people to fill the roles was Treat’s first challenge. Casting is usually the hardest part of putting together a show, he said.

But “we have a great cast,” he said, and a mix of newcomers and seasoned performers creates the momentum needed to drive the storyline forward.

Since June, the actors have poured their hearts and souls into connecting with their characters. Considering the subject matter, this has been an emotional ride for many actors. For Treat, who takes on the role of James, it’s probably the most emotional role he’s ever played on stage – or at least in a long time, he said.

“It’s just physically and emotionally draining to play against James. So it’s different,” he said.

Knowing Treat has written over two dozen one-act or stage plays and around 200 short sketches put things into perspective. And with “God in the Machine” being his most recent piece, it’s clear that this one is special.

The play’s thought-provoking conversations served the cast themselves. At Stained Glass, the leaders believe in caring for their audience, but much of the ministry they do reaches the cast and crew first.

“One of the ladies (in the room) said, ‘Hey, you know, it just happened at the right time,’ because she’s been going through some tough times in her life recently, and that’s helping her,” said Treat.

The subjects also resonate beyond the walls of the small theatre.

Treat said he saw parallels between the piece and the ongoing global pandemic and the uncertainty that comes with it. It almost feels like an accidental analogy – accidental because the piece is inspired by a series of events in 2019.

“It’s a very confusing time. And obviously when I wrote this piece, I had no idea what 2020 was going to be like. I went through a lot of heartbreak last year,” he said. -he declares. “And so part of that comes across in this piece. It’s about dealing with grief.”

In the space of a month last year, Treat lost his closest uncle, father and mother. It was a difficult journey, he said, and he used his writing as a method of creative coping.

A question that comes up in the scenario is: if God is there, why do bad things happen?

“Even this topic with Christians is kind of” he trailed off before he could finish. “There are Christians who understand questioning God, and there are other Christians (who say) ‘Well, we should never question God.'”

“God in the Machine,” Treat said, was written for both of these audiences — those who have questioned God and those who, if open to it, can understand why some people might.

He sums up the accidental analogy as being a “thing of God”.

“‘OK, that’s why you told that story at that time,'” Treat said. “I hope God can use it and people can have some hope because there are so many people right now who just don’t see any hope in anything.”

If there’s anything Treat wants audiences to take away from “God in the Machine,” it’s that God is there.

And as one character adds, “If we question God, at least we talk to him.”

Tickets are $7 for tonight’s opening night and $10 for other shows. Reservations can be made online at sgtmidmo.org.

The Panic Broadcast ”for the virtual performance – The Racquet Press