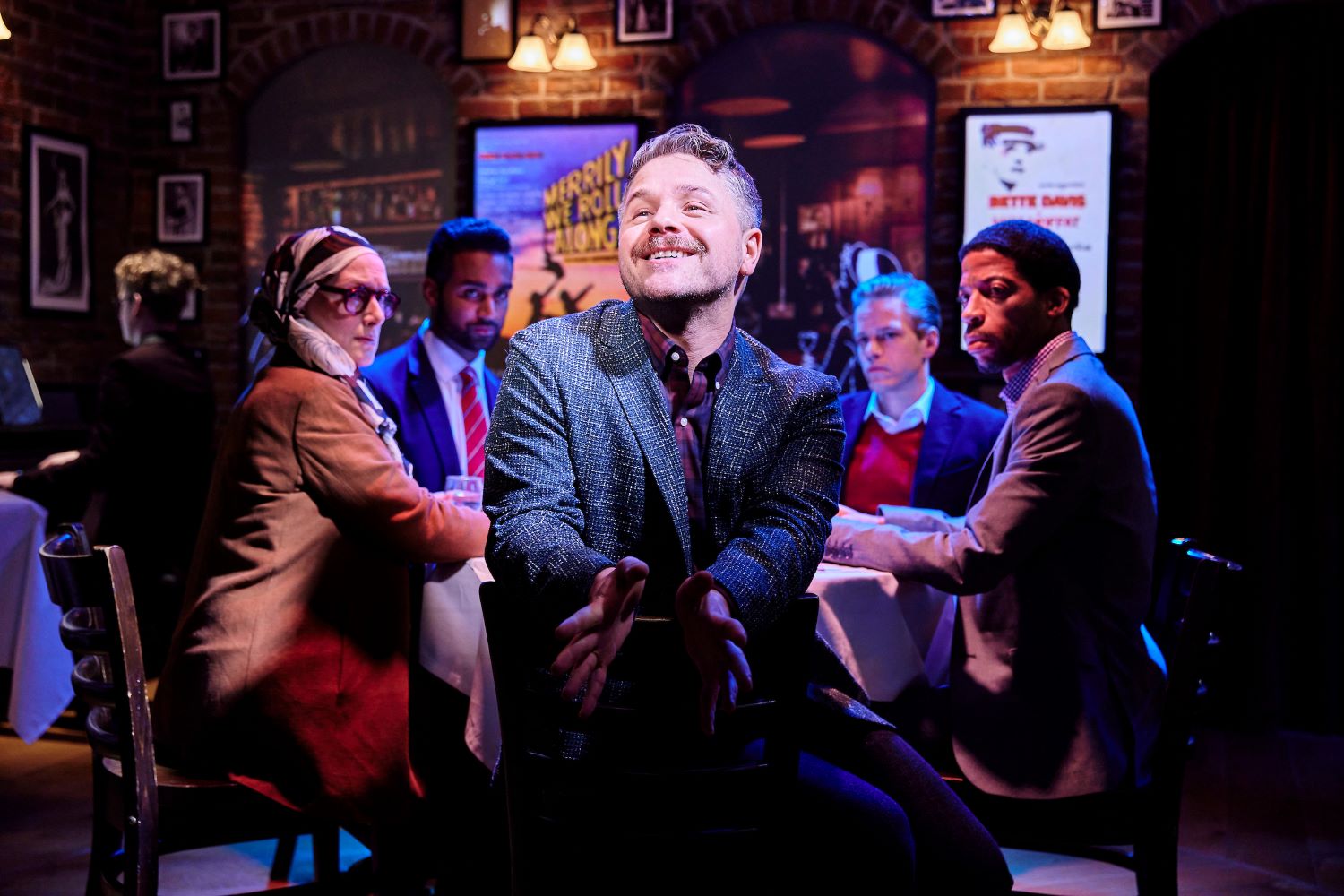 Steven (David Ames) throws a birthday party. He invited his closest friends – two of whom recently started dating their personal trainer, Steve – and his partner, of course: Stephen (Joe Aaron Reid). Their eight-year-old son, Stevie, is cared for by his grandmother. Even the handsome Argentinian waiter (Nico Conde) is called Esteban.

As a tribute to Stephen Sondheim, Stevea play by Mark Gerrard already seen Off Broadway and which is now inaugurating the Seven Dials Playhouse, is quite obvious.

Andrew Keates’ direction and Lee Newby’s set design make good use of the theatre’s compact space. A surprise spin gives a cinematic feel, especially in the first scene, where Steven confronts Stephen (bear with me) about the sexting he discovered on his partner’s phone. The videos projected onto the wall panels, designed by Dick Straker and Barbora Šenoltová, are charming. Everything is charming, in fact, except the script.

Stephen’s kind of infidelity causes a rift in Steven’s sense of self – he’s 43, a stay-at-home dad, with no idea who he is if he and Stephen break up. Her best friend, Carrie (Jenna Russell, shown below, along with Ames and Reid), is dying of cancer, but Steven doesn’t want to think about it. To make matters worse, he has a complicated relationship with sex, and he keeps running to that fucking Argentinian waiter.
It’s a whirlwind tour through Steven’s psyche, but it’s also Steve. His spare 90 minutes doesn’t give enough time for things that deserve it, like Steven’s feelings around intimacy. They are surely linked to living through the AIDS crisis; maybe Gerrard just didn’t want to get into it, that’s understandable. Sondheim expert Russell is brilliant, walking a tightrope between humor as a coping mechanism and genuine existential despair. But Carrie’s storyline feels nailed down, perhaps to give the play a female character.

Matt (Michael Walters, shown below, starring Ames) and Brian (Giles Cooper), the aforementioned couple who bring Coach Steve into the fold, aren’t fully fleshed out either. Brian is a cartoon villain with “a great ass,” and Gerrard doesn’t let Matt and Steven have an interesting enough conversation about Matt and Brian’s polyamorous relationship. It doesn’t help that everyone’s name is Steve.

At worst, Steve it feels like sitting next to a group of theater kids in a student bar. The Sondheim references are great, but when they happen every other line, you’re a little tired. (Maybe I’m just grumpy because I didn’t understand most of them.) In a play that always threatens to turn into a musical, the fact that it doesn’t is almost a disappointment.

Carrie asks Steven if he ever wonders if their conversations are “just noise”: a moment of startling realization on Gerrard’s part. There are a few pithy lines: “Lisa didn’t abandon me,” protests Carrie at one point, speaking of her ex-partner. “She just…moved.” But many of them get lost in the deluge of frankly bizarre lines and remarks. “God, I’m shocked,” Matt said, instead of being allowed to To display that he is shocked.

Theater should be inclusive; Steve nevertheless feels like walking into a party full of people you don’t know, all talking about something you’ve never heard of. It sounds like a play that Gerrard was to write and Keates was to direct. But it’s probably a much better experience if you’re an older gay man.