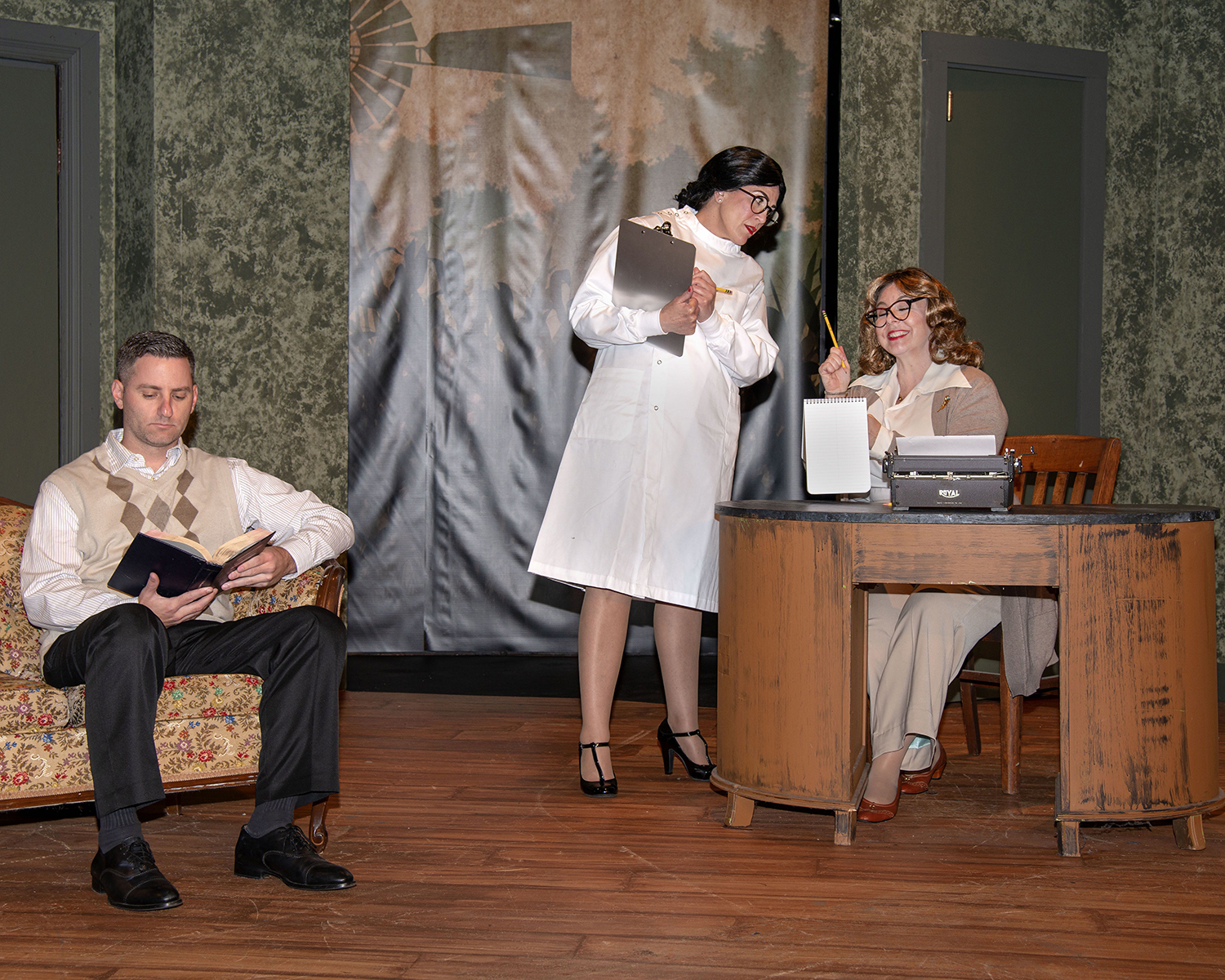 What would a Charles Busch play be without distinctive elements like a satirical take on the film industry and the various genre films of the 1940s, 50s and 60s, blacklisted sweeps of Hollywood personalities, and the tortured relationships men have with stuffy moms?

We also can’t leave out the campy tone that informs every Busch show and the crucial cross-dressing roles the writer and actor have always written for himself on every show, allowing Busch to appear in his own parts.

This means that whenever a local theater picks up one of Busch’s off-Broadway hits like “Red Scare on Sunset,” “Psycho Beach Party,” or “Vampire Lesbians of Sodom,” a play actor will have to portray the cross-dressing de Busch – in character, of course.

Everything about Busch is on full display in Newport Theater Arts Center‘s new staging of “The Third Story.” Although the play first appeared in 2008, NTAC is the first Orange County venue to produce it.

It would be great to point out that the directing is great – but alas, it’s not.

For years, director David C. Carnevale and his partner Joey Baital ran the groundbreaking Theater Out in Santa Ana’s Artists’ Village, showcasing works by and/or about the LBGTQ community.

Since its production of “The Third Story” includes recurring (let’s even say veteran) TO actors like Ben Green, Lori Kelley, and Jules Ronquillo, stopping by NTAC for this show is like seeing a TO show. Cort Huckabone and Terra Taylor Knudson, well known from the Long Beach Playhouse to the many Orange County theater companies along the coast, add coastal flair.

The deft comedic work of this quintet and NTAC newcomer Vita Muccia is the icing on a cake that is, sadly, flat. The fault lies not with the production, but with Busch, who fails to realize the potential of his enticing concept.

The framing story is about a screenwriter named Peg (Knudson), a salt-tongued, two-fisted drinker who helped build Hollywood in its heyday. Desperate to revive her career as American society reboots after World War II, she seeks out her son Drew (Green), who has quit the movie rush, moved to Omaha, Neb., and become a postal worker.

Peg offers them to collaborate on a screenplay. Even rejecting his mother’s persistent overtures, Drew gets sucked into his brainstorming sessions. Her hybrid storyline involves mob czar Queenie Bartlett (Huckabone), her hooligan son Steve (Green), and her gum-chewing moll Verna (Muccia).

A sci-fi B-movie is spoofed as beautiful but rather cold scientist Dr. Constance Hudson (Kelley) stages cloning experiments in her lab. With the help of her Russian colleague, Dr. Rutenspitz (Knudson), the doctor has created a human unfit for clubfoot that she calls Zygote (Jules Ronquillo).

Gang and sci-fi stories quickly intertwine when Queenie encounters Zygote and realizes she may have cloned herself. She hires Constance to create a duplicate. Called “Queenie 2”, she is as colorful and flamboyant as her source human, but has a personality and motivations of her own, including a sweet and nostalgic personality.

The title’s “third story” is an amalgamation of Russian fairy tales that Peg told Drew as a child. In this story thread, Vasalisa (Muccia), a beautiful young princess, is too shy to approach and meet the prince of her dreams, so she makes a pact with Baba Yaga (Ronquillo), an aging Russian witch who promises her trust. in her and a witty personality. All she has to do is give up her eternal soul.

The framing device of mother and son spinning various imaginary tales has one overriding purpose: by breathing life into their silver-screen flights of fancy depicting parents and offspring struggling to solve lifelong problems, they are likely going to mend the rifts that have plagued their own relationship for years. .

All six players are superb, exhibiting deft comedic timing – notably Green, Kelley and Ronquillo. Knudson’s Peg is pleasantly coppery. Green realizes the intricacies of the Drew character and plumbs its depths, crafting a believable and heartbreaking portrayal and having fun sending the stereotypical little movie cowl with his New York B badass character, Steve.

The Zygote of Ronquillo is a physically and psychologically tortured soul. Huckabone etches both a tough, self-assured Ma Barker persona and a touching vulnerability and almost ethereal fragility as Queenie 2.

“The Third Story” tells a theme similar to what Sondheim had done with “Into the Woods” decades earlier: that parent-child relationships are tortured. Similar to the cloning process, the script generates multiple iterations of parent-child pairs that start with Peg and Drew and are then projected into the stories they create. In fact, noticing and identifying the myriad pairs as the stories progress is one of the most rewarding aspects the play has to offer.

Despite the disappointing results, this “third story” is still worth a look. It’s a joy to see performances where the actors so obviously relish their work and even if they’re just an occasional glimmer, to see flashes of imaginative inspiration.

Music, theatre, arts and more on the Isle of Wight from April 1