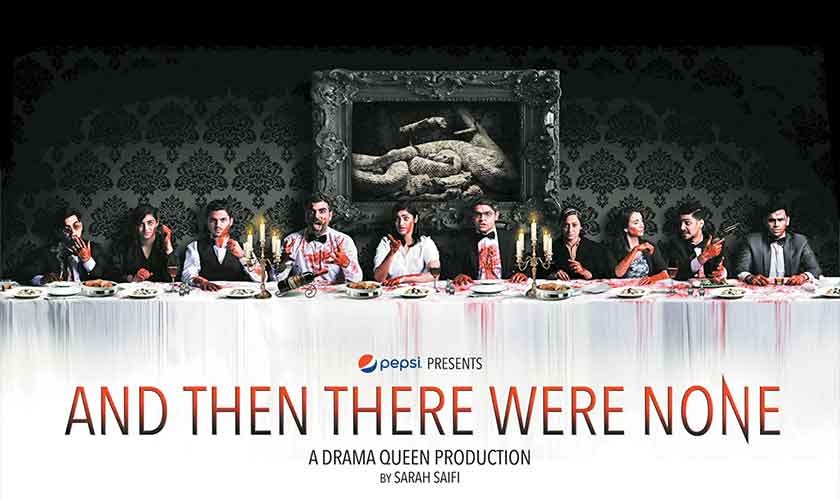 With the recent conclusion of Jashan Sawan Ka in Karachi, Drama Queen Productions is set to bring a theatrical production, titled And Then There Were None.

Adapted from the detective novel of the same name by Agatha Christie, the play is directed by Arman Tejani and Ahmed Majeed Agloria. And Then There Were None is the story of ten strangers who have very little in common and are lured to a mansion on an island off the coast of Devon by the mysterious UN Owen. A record starts playing during dinner and the voice of an unseen host accuses each person of hiding a guilty secret. And things take a bad turn from there.

Written in the 1940s, And Then There Were None is an Agatha Christie classic and has been adapted and performed many times around the world.

According to Sarah Saifi, the play’s producer and CEO of Drama Queen Productions, they wanted to bring something new to the Karachi theater scene.

“Right now there are two extremes – one is independent theater and the other is extremely commercial theater – and nothing in the middle,” Saifi said via a press release. “We wanted to bridge that gap so that theater would be accessible to all kinds of people – and could be enjoyed easily. Since we’re a company that believes in gender equality, we’ve changed quite a few things about this play. We removed the racist aspect of it and even turned some male roles into female ones to bring the play with us into the 21st century,” she added.

And Then There Were None will premiere tomorrow (August 9) at T2F, Karachi and will be open to the public on August 10, 2019.