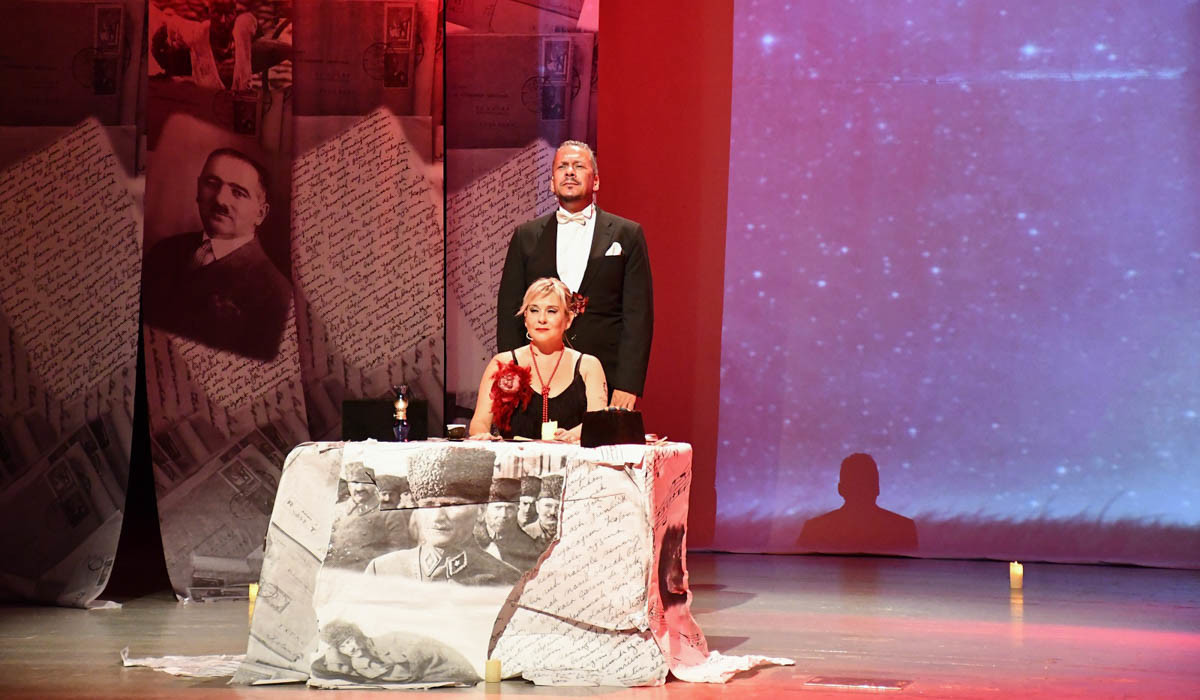 As part of the Eastern Mediterranean University (EMU) Art Days, the play titled “Esaretten Özgürlüğe” (From Captivity to Freedom) featuring Turkish Cypriot theater artist Hüseyin Köroğlu and Şenay Saçbüker is presented at the Rauf Raif Denktaş Culture and Convention Center on Wednesday, October 26, 2022 at 7:30 p.m. Yılım Ceceoğlu accompanied Hüseyin Köroğlu and Şenay Saçbüker with a piano performance during the play.

The play written by the AŞHK Theater and directed by Hüseyin Köroğlu depicted the conditions in which the historical period that ended with the proclamation of the Republic of Turkey was lived and how these lands were entrusted to us. The play tells how people, under the leadership of Mustafa Kemal Ataturk, escaped from captivity and attained freedom by writing epics. A magnificent journey was brought to life on stage with songs, folksongs, marches, letters from the front, poems from Nazim Hikmet’s Kuvayi Milliye Epic and moments from Nutuk.

“We will follow in the footsteps of Mustafa Kemal Ataturk”

Giving a speech at the end of the play, theater artist Hüseyin Köroğlu evoked the memories of the Turkish Cypriot people during the Turkish War of Independence. Köroğlu said that after announcing that the theater troupe named Turkish Istiklal Kumpanyası would give performances during the said period, help started coming in from all parts of Cyprus. Köroğlu noted that as a Turkish Cypriot, Turkish Cypriot support for the War of Independence with performances and plays is extremely impressive, and pointed out that Turkish Cypriots have followed in the footsteps of Mustafa Kemal Atatürk ever since. the day they existed and will continue to continue to do so.

“The Republic is Virtue, Independence and Sovereignty”

Teacher. Dr. İşçioğlu thanked the AŞHK Theater and the esteemed artists and presented them with plaques and bouquets. Then TRNC Chairman Tatar thanked Hüseyin Köroğlu and AŞHK Theater for their performance and said; “The republic is virtue, independence and sovereignty. A hundred years ago, Turkish Cypriots always looked to Anatolia, looked at Mustafa Kemal, were inspired by him and were able to win freedom in these lands”. Tatar wished everyone a Happy Republic Day on October 29 and presented souvenirs at the AŞHK Theater. The play ended with the whole audience singing the “10. Yıl Marşı” (10th year March).


EIN Presswire’s priority is source transparency. We don’t allow opaque clients and our editors try to be careful not to weed out false and misleading content. As a user, if you see something we missed, please bring it to our attention. Your help is welcome. EIN Presswire, Everyone’s Internet News Presswire™, attempts to define some of the boundaries that are reasonable in today’s world. Please see our editorial guidelines for more information.