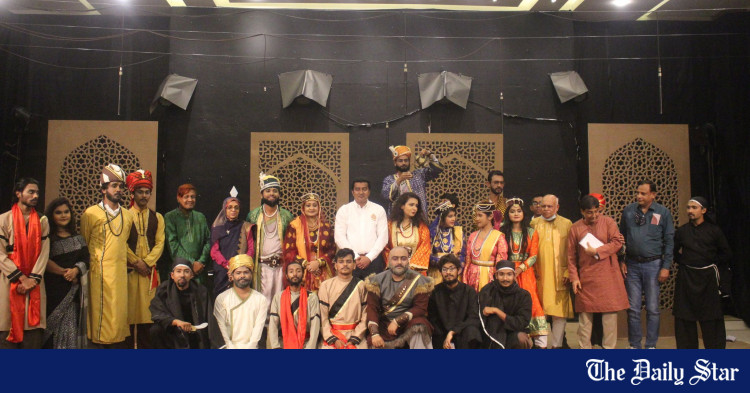 Honoring the traditions and history of the Indian subcontinent, students from the Theater and Media Department of Tejgaon College staged the historical play “Razia Sultan” at the college’s Abdur Rashid Main Auditorium yesterday.

The play is scheduled to be performed at the main Abdur Rashid Auditorium until March 2.

For all the latest news, follow the Daily Star’s Google News channel.

As the main guest of the event, the Minister of Interior of Bangladesh, Asaduzzaman Khan Kamal, was present, alongside Professor Dr. Biswajit Ghosh, Department of Bangla, University of Dhaka, and Professor Wahida Mollick Jolly, among others.

The program began with a short speech by the Minister of the Interior. “Theatre has been a part of Bangali culture for a long time, although its popularity has waned somewhat in the present,” he said. “The play embodies our millennial cultural history and the richness of our arts – be it our local Pala Songeet, dance or plays.”

After the speech, traditional musical performances were held.

“Razia Sultana” revolved around Delhi’s only female sultan Razia Sultan, who became the heir apparent to the throne after the crown prince’s untimely death. The piece mixed vigorous performances with traditional songs focusing on Razia Sultan’s rise to power as the 5th Sultan in his short four-year reign and his downfall during the war to reclaim his throne.

“Razia Sultan was the first female leader of the Indian subcontinent who, against all odds, led such a great sultanate,” said Dr Biswajit Ghosh. “Many call her Razia Sultana. But this play is titled Razia Sultan, which denotes a stance against gender bias throughout the play.”

Under the supervision of the Principal of Tejgaon College, Prof. Md. Abdur Rashid, “Razia Sultan” was written by Dr. Jaharabi Ripon and directed by Prof. Atiqul Islam and Syed Mohamad Zubair from the Theater and Media Department of Tejgaon College. Professor Harun Ar Rashid took care of the staging.