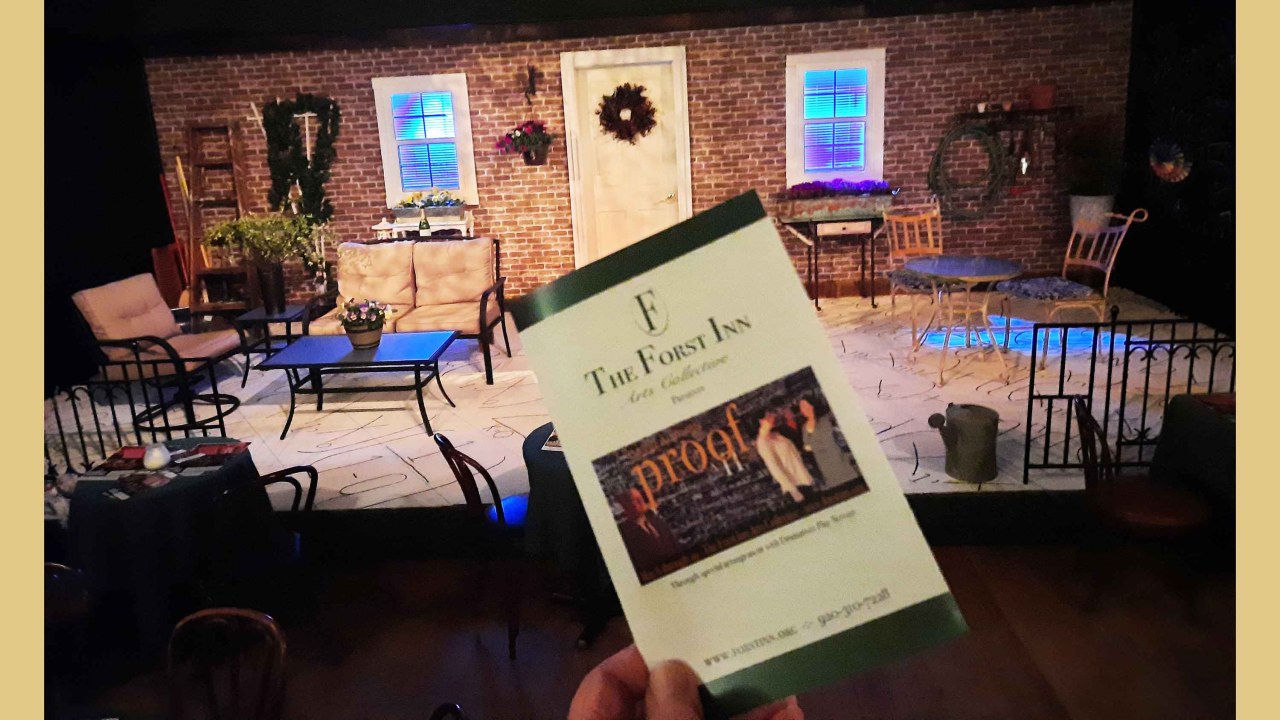 The “proof” involves theoretical mathematics at its core.

And then there are issues of family, love, death, sex, college, trust, prejudice, depression, attitude, intelligence, and sanity.

Playwright David Auburn distilled this set and won the 2001 Pulitzer Prize for Drama and the Broadway Tony Award.

At the Forst Inn for another seven performances, a highly experienced cast with robust direction from Lisa Heili grabs the heavy material and delivers it with impressive vigor.

Elizabeth Szyman plays Catherine, the daughter of a brilliant University of Chicago professor (Dan Sallinen) who has gone mad.

The play begins when Catherine is 25 years old.

She is exhausted from years of caring for her father alone.

Catherine put aside her studies in mathematics while her father scribbled notebook after notebook of “mathematical equations” – all gibberish.

Locked in another drawer is another notebook. When the drawer is opened, a revelation comes out.

The play is about that and more.

She has an attitude of that tenacity – and being a smart, headstrong woman, used to taking on challenges on her own and not afraid to give anything to anyone.

Her tongue is a sword, and she swings it freely at her sister, Claire (Carrie Todd Counihan), and one of their father’s proteges, Hal (Thomas Moore).

The acting is splendid all around.

Elizabeth Szyman is in the foreground. It creates a strong, willful, gifted, sensual, prickly, somewhat broken and sometimes soft being. Catherine is full to bursting.

Elizabeth Syzman’s performance provides some great stuff to work on for Carrie Todd Counihan as a seemingly caring sister with ulterior motives down both sleeves…for Thomas Moore as a mathematician with manipulative means of getting into the Catherine’s house, head and, eventually, heart…and for Dan Sallinen as a multi-faceted father with the ingredients that fuel Catherine’s admiration, affection and exasperation.

Scene after scene clicks among the four.

Lisa Heili’s direction extends to the eye in the creation of the flower-splattered family porch in Chicago and to the ear in the additions of atmospheric original music by Joey O’Connor that occasionally includes directing words – as well as chirping songbirds that set the audience pleasantly outside.

The title “Proof” has two meanings. One refers to a mathematical proof – a research goal to which professorial types aspire. Catherine’s father scored big with deep evidence when he was young. The other meaning has to do with “proving what you say”. Catherine’s direct manner with her mouth lands her in a riddle that finds her questioning her sanity.

The Forst Inn Arts Collective production proves – yet again – that high-level material can be performed and presented beautifully in a small theater in rural Wisconsin. The actors of “Proof” are engaged.

Cast (in order of appearance):

THE PLACE: The historic Forst Inn is located at the corner of Kewaunee County Routes B and BB. The building dates from 1868, with varying lives over the years. For a notable period – from the 1990s through the 2000s – the location was popular for Little Sandwich Theater productions, which Manitowoc attorney Ron Kaminski (d. 2018) nurtured with a caring hand as artistic director/performer / versatile for a wide range of productions. The current company is of this spirit. The stage is wide and narrow. The space is intimate. Seating is at small tables on two levels in a slight arc in front of the slightly elevated stage. To the rear of the audience is the director’s area, with lighting and sound controls. The space is essentially a theater-style black box in the front – with additions: two chandeliers above the audience, a street lamp in the seating area, and the ambiance of 1920s-style elements in the back in an area on duty. A seating/service area sits in the middle of the building, along with a ticket counter. The front bar features the bar, tables, a more 1920s vibe and a passageway to an art gallery (rotating artists) now part of the offerings of the Forst Inn Arts Collective overseen by Michael Sheeks, who teaches also at university. of the Wisconsin-Green Bay campus in Manitowoc.