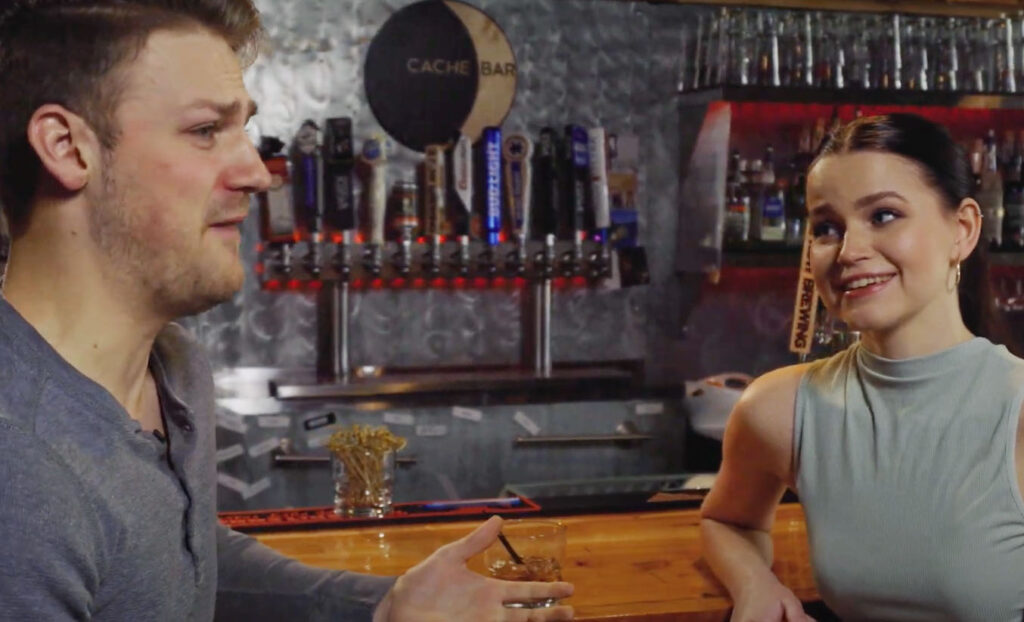 AJ Black tries his lines on Anne-Marie Kate in a scene from Gina Gionfriddo’s “After Ashley” in the Utah State University Department of Theater Arts’ Senior Acting Showcase.

LOGAN — A videotaped senior actor showcase is a touching way to say farewell to Utah State University actors who will be missed.

We enjoyed some of these artists as early as September 2019, when they brought to life Civics and Humanities for Non-majors by Jeff Talbott in the austere setting of the Black Box Theatre.

In this show’s case featured AJ Black as Trip, Rachel Banner as Dar, and Kaija Strong as Libby – all great performers, with the promise of more to come.

Joe Bayless debuted later that year in Pericles, Prince of Tire, with Mrs. Strong. He later appeared in She kills monsters.

After the COVID-19 hiatus, Ms. Strong was back as Mary Bennet in Miss Bennet: Christmas in Pemberlywith Black as the haughty Darcy.

In the staged reading of GhostsMrs. Strong shone as Helen while Bayless played the religiously smug hypocritical pastor Manders.

Ms. Strong has almost finished her career at USU as Willow, the indulgent sister in the stage reading of The Colby Sisters of Pittsburgh, Pennsylvania.

In the Senior Acting Showcase, they each appeared in a solo scene, a vignette with another performer, and a solo song.

In Tigers be still by Kim Rosenstock, Anne-Marie Kate has a wacky way of reducing a man to her size.

Rachel Banner performs a haunting and ravishing rendition of “The Beauty Is” from Light on the Piazza.

Joe Bayless brainlessly explains why vegetables are bad for you in a scene from I am the goose king by Ben Firke.

In a scene from 52n/a from Bowery to Cobble Hill, Brooklyn by Chiara Atik, Anne-Marie Kate and Kaija Strong demonstrate why two women cannot be friends.

A distraught AJ Black brags that “he has the power” in a scene from How is it by Greg Urbaitis.

Joe Bayless does a guitar solo on “Seeing You” by Groundhog Day – The Musical.

Wait until you see a guy’s pick up line in a scene from After Ashley by Gina Gionfriddo with AJ Black and Anne-Marie Kate.

Try counting the number of times Rachel Banner said “like” during a job interview in a scene from Fundamental values by Steven Levenson.

Anne-Marie Kate does a heartwarming performance of “Stay” from Amélie: the musical.

Kaija Strong lets her boyfriend down easily saying all the right things in a scene from how to be single by Abby Kohn.

Joe Bayless and Rachel Banner delicately discuss sexual politics – without saying what they want – in a scene from the wing by Dominique Finocchiaro.

Finally, AJ Black sings an exuberant version of “Run Away with Me” from Crazypeople.

You can check out the Senior Actor Showcase at http://cca.usu.edu.