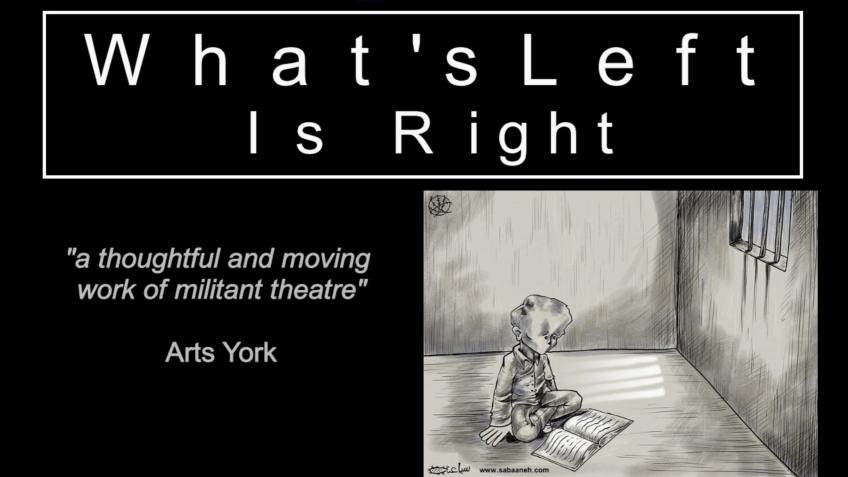 By January 24, 2021 we had raised £300 with 6 supporters in 56 days. But as every book counts, we continue to collect donations from supporters.

According to reports from the NGO Defense for Children International – Palestine, since 2000, approximately 10,000 Palestinian children have been detained by Israeli forces from the occupied West Bank and held in the Israeli military detention system. Faced with the COVID-19 crisis, The United Nations recently called Israel to release all Palestinian children detained to ensure their safety.

In response to the dire plight of Palestinian children, playwright-performer Konrad Suder Chatterjee wrote and co-directed the 25-minute play, What’s Left Is Right, the inaugural production of the newly formed Ahimsa Collective and one of 13 original plays selected for ACT II Theater Festival. Planned for staging at Arcola Theater in London in May 2020, the festival was subsequently moved online in response to ever-changing security requirements posed by the COVID-19 pandemic.

The “What’s Left Is Right” creative team has worked tirelessly, on purpose, not to let the pandemic prevent this vital story from being told.

Therefore, the piece premiered online in July this year and has so far garnered over 2,200 views. The premiere was followed by a conversation with ACT II festival director Amy Tickner, cast and crew, and guest speakers – experts in working with Palestinian children: Khaled Quzmargeneral manager of Defense for Children International-Palestine, and Nick Billboroughfounder of Hands Up Project.

‘What’s Left Is Right’ has so far achieved:

With such approval to move the project forward, Chatterjee was prompted to develop the piece in the complete trilogy of plays on the situation in Palestineunder the same title: What’s Left Is Right.

The play invites you to join the conversation about the Israeli detention system as systematic and strategic; as a means of suppression of childhood, suppression of political will, identity, civic participation and resistance to occupation.

The project is rigorously studied at School of Oriental and African StudiesUCL and LSE, London, informed by heartbreaking reports of the United Nations, its branch UNICEFand, most importantly, the Palestinian victims, their families and their lawyers, whose interests are represented by Defense for Children International – Palestine with its extraordinary campaign NO WAY TO TREAT A CHILD.

The play will be played in June 2021 in London cinemas and recorded for online/home audiences. The creative team will ensure that the project is developed and delivered in a safe manner in the event of a pandemic. We are considering full isolation together, putting in place testing and other measures to ensure the safety of everyone involved.

How can I help you?

You’ll get exclusive insight into the creative process as the piece is written, rehearsed, edited and recorded for our home audience.